ARNOLD Schwarzenegger knew his marriage was doomed shortly after the birth of a three-stone baby carrying a sawn-off shotgun.

The tower of knuckles will part from his wife Maria Shriver, who in turn will begin the slow surgical process of reversing all the work she has had done to make her look like her husband.

Family lawyer, Wayne Hayes, said: “I think the jig was up when Maria was sent a Youtube link of five year-old Gunther shouting ‘Fug you, asshole’ to his nursery nurse in a thick Austrian accent.

“I don’t know if you’ve ever seen a toddler chomping on a cigar, but it’s fantastic.

“He’s now 10 years-old but he already looks like a Nazi midget made out of bowling balls.”

Shriver first became suspicious that Schwarzenegger was having an affair with a member of their domestic staff when the woman in question made no complaints of sexual harassment.

By the time she eventually left their employment to go on maternity leave, she had to prop her stomach up with a unicycle.

Final confirmation of Schwarzenegger’s secret son came on the boy’s tenth birthday when he arrived naked at their house demanding clothes, boots and a motorcycle as a birthday present.

Hayes said: “The last time I spoke to Arnold he was making plans to go back in time to kick his own arse so he wouldn’t be able to rump the maid in the first place.

“I wouldn’t underestimate him. He was governor of California for eight years. What the fuck was that about?” 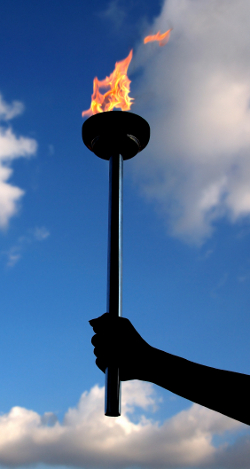 WALES is to come face to face with fire on a stick.

As the Olympic torch parade route was revealed, experts said the sight of the naked flame in Wales would lead to either an evolutionary leap forward or total catastrophe.

Dr Julian Cook, an anthropologist at Reading University, said: “They may have seen forest fires – and of course there are the dragons of their imagination – but the sight of an upright human carrying a flaming torch will be like alien visitors from a distant galaxy.

“Most will stay in their caves, but the more curious and intelligent ones may try to examine it from a safe distance. They will certainly want to sniff it.

“And no doubt one of the younger males will try to have sexual intercourse with it, thereby learning a costly lesson.

“I would also imagine a group of small, tough females will be dispatched to Cardiff to form a protective ring around Charlotte Church, lest she become ‘enwitched by the dragon stick’.”

He added: “This is their date with destiny. It could open up a whole new world of cooked food and warm indoor spaces. Or, as I suspect, they will burn the place to the ground within about 20 minutes.”

Meanwhile the rest of Britain is now dividing itself into those who are excited about seeing the Olympic flame and normal people.

Tom Logan, from Finsbury Park, said: “When we see the flame we think of Prometheus stealing fire from mighty Zeus and gifting it to man who then used it to forge new technologies and build a society that wants to watch a bunch of dreary show-offs poncing about a field.”

Helen Archer, from Stevenage, added: “I do think it’s great for the kids. It fills them with optimism and ambition and then, eventually, illegal steroids and steroid-masking substances that they will claim are just herbal tea.”