SURFING experts have condemned Beyoncé’s technique of grinding her crotch against her surfboard.

Surf shop proprietor Wayne Hayes criticised the star for setting a bad example to young surfers by “enacting some sort of sexual pantomime” with her board.

He continued: “Either do it the amateur way on your belly or take the classic two-footed stance, but try ‘graining on that wood’ like Bey recommends and you’re going to wipe out immediately.

“If I didn’t know better I’d swear the whole surfing thing is just a metaphor for straddling the cock of her husband, Jay-Z.

“And another thing: it’s a surfboard. Not a surfbort.” 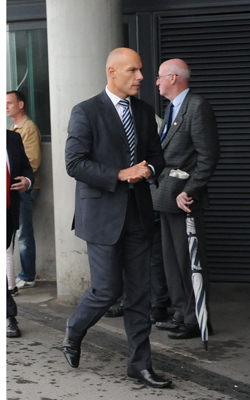 THE Referee’s Association is to make Howard Webb live in Bootle for three months.

Webb waved play on after Luis Suarez was brought down in the penalty area, on the basis he was probably asking for it.

Arsenal went on to win the game despite Liverpool’s best efforts to have Steven Gerrard kick as many people as he could.

Before the match, fans highlighted Liverpool’s poor success rate for games officiated by Webb, although this has to be placed in the wider context of Liverpool’s general awfulness.

Bootle resident Wayne Hayes said: “We will give Howard the kind of welcome you’d expect for a Yorkshire-born ex-copper with an inflated sense of self-importance.

“Every piece of animal excrement placed on, in or near his house will be indicative of our trademark sense of humour.”

Guards will be posted outside the new Howard residence, situated opposite local pub The Kop & Grudge-Holder, but have been instructed to not notice blatant offences against him.

Webb said: “Oh no, is everybody talking about me instead of the football?

“I hate it when that happens. What else are they saying about me?”