This last year hasn’t been about global megastars who can sell out Seoul Olympic Stadium two nights running. It’s been about the unsung heroes. So when I’m unobtrusively mingling in my Mylo Xyloto stage outfit, I don’t let them remain unsung. I leap on a table and belt out Yellow, and all the applause I receive is for them.

You know what? I’m not a rocket scientist. I’m just a guy in a band that’s sold 100 million records. So for our new single I chose to honour real pioneers by playing it live to the International Space Station. You could do something similar, like phoning the bloke at the 24-hour garage and knocking away at a glockenspiel.

Remember that album cycle where I went on about Fair Trade and Guatemalan coffee, or something? Well, I walked that walk, bought a plantation, wrote it off against tax, and it’s making more profit than ever. If you want to do the same, perhaps grow herbs in a window box. Sorry, I tried to not make that sound pathetic but it just does.

Compare yourself to Jesus, but unfavourably

Not everyon can say their album release prevented a Sony sharecrash, but I can. So, like Jesus, without me there would be no Christmas for a lot of little kiddies. Though he could heal the sick, do resurrections, walk on water and turn it into wine, so he just wins.

Reflect on your blessings

Sometimes when we focus on what we don’t have we forget that losses can be gains. You might have lost your job but gained a whole load of free time and a new career as a barely-breaking-even Hermes driver. Me? I lost a wife who sells fanny-scented wallpaper and whose idea of a mad, hedonistic breakdown is a quinoa cocktail and a slice of Hovis.

One time I met Bill Gates and told him Clocks should be the Windows opening theme. He hadn’t heard it. I played it for him on half-drunk wheatgrass smoothie glasses. He said he’d never heard of me and it was too long. I was so humilated but I let it become a learning moment. And during that brunch I wrote Fix You or whatever. 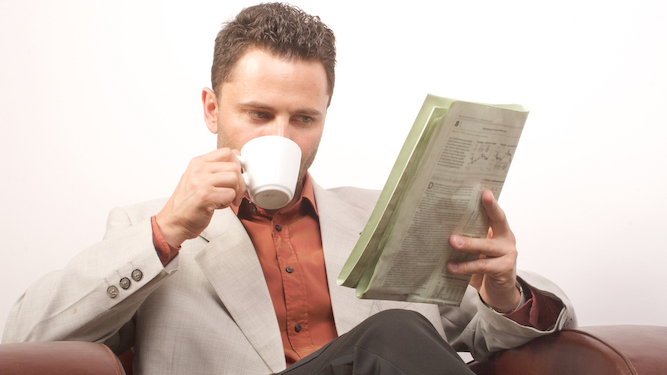 You pop out and grab a latte. Within hours the headline is: ’Latte-swilling METROPOLITAN ELITIST Tom Logan flaunts his disregard for the honest, proud tea-drinkers of this country’ and a man in the comments says you should be hanged.

The Mail scoured your Facebook page and found a 2011 post mildly complaining about Royal wedding coverage. The headline is: ‘TRAITOR! Out-of-touch Logan thinks hard-working Wills and Kate aren’t worth his PRECIOUS TIME’. In the comments, a man calls for you to be publically disembowelled at the Tower of London.

You’re keeping your head down and having a sandwich in the garden when you hear the sound of camera shutters. Before you’ve finished eating a horrendously unflattering photo of you is in Mail Online’s sidebar where you look like Jabba the Hutt vomiting dough.

You watch To Kill a Mockingbird on Sony Classic Movies with the curtains closed, and text a friend that it’s ‘not bad’. Two hours later Sarah Vine’s column is published, headlined: ’24-7 WOKEATHON: Why can’t left-wingers ever take a day off their Black Lives Matter BANDWAGON?’ The comments agree you should be deported.

The front page today is a montage of all your ex-partners, with the headline ‘The REAL Logan: by the people who know him inside out’. There’s nothing damning or particularly interesting in the article, but it’s a tense 30 minutes of reading the five pages the Mail has devoted to a non-story.

A picture of your supermarket trolley contents appears, with item-by-item analysis. The headline is ‘Logan swills POSH MERLOT while thousands have lost LIVELIHOODS to COVID’, and includes a list of vintage reds you could spend £10,000 on to continue your sneering rampage. The comments are lurid fantasies of torture.

You’re not sleeping, you’re barely eating, but the week is almost over. Then the Mail on Sunday publishes an expose revealing that aged 10 you wrote to Jim’ll Fix It, calling you ‘a fan and proud supporter of notorious paedophile Jimmy Savile’. This will continue all next week, and forever.