Huhne realises too late what a 'Twix' means in prison

CHRIS Huhne has been left in severe discomfort after accepting a ‘Twix’ from fellow prisoners.

A source said: “These two muscular gentleman asked him if he fancied a Twix, to which he responded ‘Yes please, chocolate bars are delicious’.

“They were like, ‘No, it’s not a chocolate bar, it’s actually a very thinly-veiled euphemism for something involving three males, but thank you for consenting.’

“I bet he wishes he’s taken those three points and a small fine.” 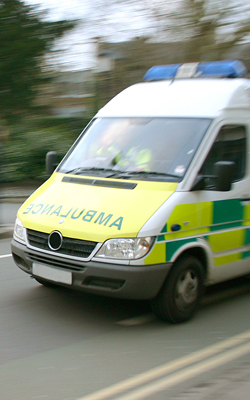 EMERGENCY calls are going unanswered as hipsters pressure the NHS to decommission ambulances for their art projects.

Luckily an ambulance was passing, but it wasnt staffed by medical professionals – just some youths with a pop up exhibition of sadomasochistic cartoons from the 50s and 60s.

“There was also an on-board DJ playing rockabilly records. Ironically he was called ‘Doctor Hellfire’ but could do nothing to ease the agony radiating through my torso.

“They were pleasant though and one of them ran to get me some paracetamol, while I lay there screaming and looking at the kinky drawings.”

Ambulance owner Nikki Hollis is a sculptor specialising in bodily fluids: “Most days Ill get four or five people flagging me down.

“I stop and pretend to help but actually just siphon their blood and urine for use in my forthcoming show ‘Garden of Death’.

People believe anything you tell them when youre driving an ambulance.