I Can Do A Terrible Scottish Accent Too, Says Laurie

HUGH Laurie has appealed to British casting directors insisting he can do regional accents that are ‘every bit as dreadful’ as the American one which has earned him millions of dollars.

Since moving to the US the former Englishman has become a household name, starring in the gritty drama House! as the brilliant but edgy bingo caller, Donovan House.

With his trademark walking stick, House limps between the tables, swallowing handfuls of prescription pain killers and telling the frightened customers why bingo is a ‘cruel mistress’.

The star of Stuart Little and Stuart Little 2, said: “I would love to play a really meaty British character, as long as they don’t mind me sounding like a posh Englishman with a speech impediment.

“I can do your classic Highlander: ‘Och, will ye no be havin’ a wee dram of whisky with yer porridge the noo’.

He added: “Of course, my Welshman is legendary: ‘Now then, Dai bach, can I be having sexual intercourse with your prize ram?’.” 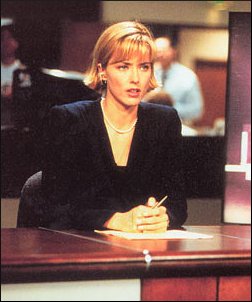 SCIENTISTS engaged in cutting edge bio-genetic research will be condemned to the eighth circle of Hell, surrounded for all time by panderers and seducers, the Vatican said last night.

Setting out a new list of deadly sins, the Church warned that those involved in unlocking the structural nature of the human genome will be scourged by horned demons and be forced to eat fire for at least the first half of all eternity.

The new rules, developed by the Supreme Tribunal of the Apostolic Penitentiary – the Vatican's modernising wing – include:

Scientists who conduct stem cell research using state-of-the-art electron microscopy will be condemned to the second ditch of the eighth circle of Hell, where they will wallow in pools of their own excrement.

People who make large sums of money through a series of complex trades on the international futures exchange will be condemned to the fourth circle, where they will push large rocks around until the end of time while being taunted by crows.

Anyone who fails to set up a monthly direct debit to Opus Dei will be forced to endure the fifth ditch of the eighth circle, which is filled with boiling oil and guarded by 10 untrustworthy demons.

Those who drive their hybrid cars using the petrol engine, instead of the electric motor, more than 50% of the time will be cast into first ring of the ninth circle, where they will suffer alongside Traitors to Kin and have their head frozen in a block of ice.

Meanwhile, people who manufacture or consume synthesised drugs, such as ecstasy and meta-amphetamine, can look forward to eternity in the third circle, where they will endure a constant, heavy rain and be terrorised by Cerberus, the three-headed dog.