Her Majesty issued the statement after the arrest of one of Andrew’s friends and business associates, Ghislaine Maxwell, to ensure no genuine Royals were linked to the scandal.

She said: “Though I am aware of the so-called ‘Duke of York’, a man of such proven bad character is not somebody a head of state can afford to be associated with.

“While we have, from time to time, attended the same social events and weddings, I have always assiduously avoided any contact with him and we have certainly never spoken.

“Some commentators have pointed out that, on a date in 1960, he exited my womb via my cervix. On that occasion I may have wished him well on his departure.

“But I certainly had no part in his childhood. He attended a boarding school and I believe subsequently joined the army in an attempt to give direction to his aimless waste of a life.

“I join the nation in hoping that the US authorities are able to speak to him soon. And if I never hear about that ex of his Sarah Ferguson again it will be too soon.” 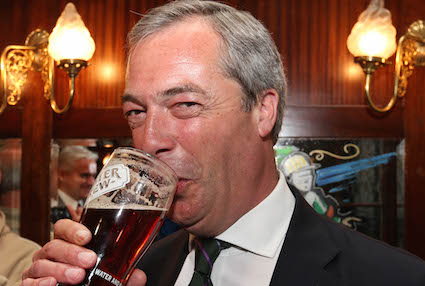 AS pubs reopen, Nigel Farage has got back to the daily grind of being photographed holding a pint and grinning like a twat.

Having spent lockdown violating America’s travel ban and reporting illegal migrants to the police, the amphibian-faced Brexit Party leader looked enthusiastic as he took his first steps behind the bar.

Farage said: “There’s more to being a politician than maintaining a deceptive public image through naff photo opportunities. I’ve also got to put in hours of backbreaking labour sipping pint after pint, which the media just happens to find fascinating.

“The shifts are long so I like to lift everyone’s spirits by beaming from ear to ear. I might even crack a joke, but I don’t like to bring the mood down by talking about politics.”

Making sure the cameras caught his best angle, Farage added: “Cynics think I only do this for attention. But I don’t think there’s a single person in England, or indeed Scotland, who would want me to fade into obscurity.”

Pub customer Stephen Malley said: “I was worried pubs would be overwhelmed when they reopened. But knowing Farage could be in any one of them is likely to scare people into staying at home.

“For that I think he should be knighted. If he wasn’t such a grinning twat.”