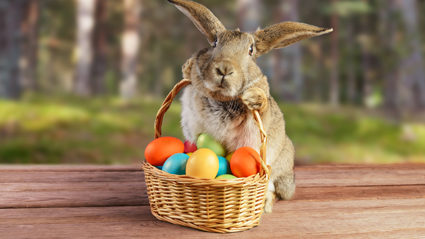 THE Easter Bunny has expressed shock and disgust that he’s just some weird metaphor for sex.

The seasonal rabbit said it had finally clicked with him that rabbits are known for their excessive mating and that the eggs he delivers are a symbol of birth.

He said: “I was getting all these eggs ready for kids and then I thought, ‘This isn’t just delicious chocolate that coincidentally happens to be egg-shaped, this whole thing is about reproduction’.

“I’m not totally sure how comfortable I am with being a massive symbol of fertility, especially given that most of my fans are under 12.

“I thought I was doing it because rabbits were cool and funky and kids love them. Now I feel a bit soiled.”

Other animals have already offered to step in if the Easter Bunny quits his role as main egg delivery operative.

Duck Mary Fisher said: “I’m happy to be a symbol of fertility and I can also deliver my own eggs.”

Meanwhile polar bear Wayne Hayes said he would deliver the eggs for free as long as he got his expenses covered.

DONALD Trump remains at large because fellow bellends refuse to disclose his whereabouts, it has been claimed.

The flaccid billionaire, who poses a serious threat to humanity, remains at liberty because the world’s millions-strong bellend community refuses to give authorities advance warning of where he will pop up next.

Security expert Roy Hobbs said: “In the UK alone there are over two million bellends, mostly working in PR or marketing but also spread like a smear across corporate culture.

“They meet at ‘networking events’ and ‘brunches’ to share information on their awful, stupid schemes and actively admire Donald Trump for his apparent ‘balls’ even if that only amounts to saying aggressive-sounding things about what he would do in totally hypothetical situations.

“The UN would like to capture and imprison Trump, that’s obviously in everyone’s best interests. These fucking bellends know where he is but they aren’t playing ball.”

“I am proud to be a bellend and I am proud to call Donald Trump my fellow bell. He is a great man and a massive, massive bellend.”