The novelist has already provoked outrage among self-styled ‘animal lovers’ after posting pictures of herself cooking a rabbit that strayed into her garden.

Neighbour Tom Logan said: “I hadn’t seen my cat for a few days, and I was vaguely aware that it had been shitting in her garden.

“Peering into Jeanette Winterson’s kitchen window, I saw a tabby pelt in the bin and a few dozen neat little pasta parcels on the table. I didn’t say anything because I was too scared.

“To be fair the results looked quite appetising. But I certainly won’t be buying any more of her books.” 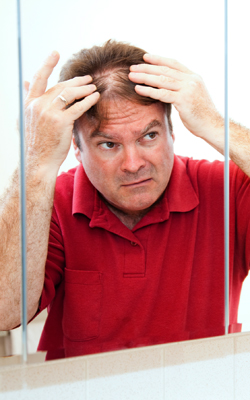 MEN can now suffer from a range of exciting new hair loss patterns.

The patterns, created in a collaboration between top designers and geneticists, offer hair loss sufferers fresh new styles including the Zig-Zag, Stardust and Paisley.

Designer Denys Finch Hatton said: “For too long bald men have been stuck with boring old hairlines like the Eddie Munster, Crown Crop Circle and, of course, The Island.

“Now, in partnership with designers like Julien MacDonald and top streetwear brands, there’s a male baldness pattern that reflects the individuality of the balding man.”

New designs include the Reverse Mohawk, popular with aging punks, where hair falls out along a central strip, and the film noir-inspired Venetian Blind where it recedes in gradually widening bands.

28-year-old Tom Logan said: It was always obvious I was going to lose my hair so I married young, before I became a dome-headed monster.

But now Ive got so many options  the Crosshatch, Ted Baker florals, these tie-dye looks. Being a slappo has never been so exciting.

The black market in dihydrotestosterone, which causes hair loss, is booming as normal men leap on the baldness bandwagon.

Personal trainer Nathan Muir said: When I shave Adidas stripes into my head it like grows out two days later, but these baldy men got it for years.

I got to get some of that bulbhead action.