POLICE investigating a series of death threats against the actor Sir Ian McKellen now believe they were made by Orcs.

The severed head of a goblin was left on the doorstep of the star's London home last week with a note attached saying 'You're next, Hobbit fiddler'.

Orc faeces were pushed through his letterbox and 'Gandalf shags midget arse' and 'Fuck off back to the Shire' spray-painted on the front door.

Two ugly fanged humanoids were seen running away from the house, and a series of abusive calls later that night were traced to a phonebox at the Black Gate of Mordor.

Tolkein scholar Julian Cook said the Orcs were targeting Sir Ian in revenge for his role in defeating the armies of the Dark Lord Sauran at the Battle of the Pelennor Fields.

Mr Cook said: "Sauran's like 'I'm going to kick your arses and get your Ring and stuff' and he's got these totally fucked-up fighting elephant things, and the Orcs are going mental on everyone.

"Then Sir Ian stands up, and he's all 'fucking hell Hobbits, we are totally getting creamed here' and he just nails the top Orc with some vodoo wizard shit, and everyone charges in, and there are bits of Orc everywhere."

Despite this, Sir Ian is blaming the threats on a bigoted section of Middle Earth society unable to come to terms with his sexuality.

He said: "I fought for ten days to slay the Balrog, but do they call me the Balrog Slayer? No.

"But you fuck one hobbit…"

Ronaldo To Star In Remake Of 'Roots' 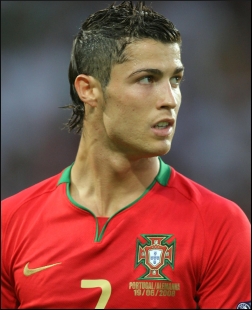 FOOTBALLER Cristiano Ronaldo is being lined up to star in a multi-million dollar remake of the epic TV series Roots.

Producers say the star's treatment at the hands of Manchester United make him the perfect choice to portray the young African slave who is beaten by his brutal masters.

The Portuguese winger said he had been traumatised by 'outrageous' demands that he honour the £125,000 a week, legally-binding contract, which has brought him only, misery, adulation and Gemma Atkinson.

Speaking from the titanium gazebo in the rose garden of his 31-room mansion, Ronaldo said: "I feel I can relate to the suffering of African slaves.

"If anything, it is worse, because footballers cannot sing while we work, whereas they had time to develop gospel music during their 16-hours shifts before dropping dead from exhaustion."

In the series a young African boy is dragged from his homeland and shipped to America where he is forced to work in the fields by a cruel and violent plantation owner.

"The similarities are uncanny, though admittedly, the Lear Jet that flew me from Lisbon to Manchester wasn't packed with 150 other players sleeping head-to-toe."

Ronaldo also conceded that, while the slave-master in Roots administered brutal beatings, Man Utd boss Sir Alex Ferguson had nurtured his talent, lavished him with praise and turned him into one of the best footballers in the world.

"But without the freedom to do whatever I want, wherever I want, for whatever fee I want, I am exactly the same as a cotton picker forced to live in a shed, dying at the age of 32."

He added: "I know the people will love my acting. Already, in the streets, I hear many of them calling me 'Kunta'."