KATE Middleton’s parents have finally been subjected to a series of horribly offensive comments by Prince Philip.

Michael and Carole Middleton had lunch with the Queen and Duke of Edinburgh at Windsor Castle yesterday where the Duke told Mrs Middleton that she probably used to be attractive.

A Buckingham Palace spokesman stressed the lunch was relaxed, low key and informal allowing the Duke plenty of time to examine Mrs Middleton’s teeth and buttocks.

Prince Philip then told the mother of the bride-to-be that he understood her grandfather was a coal miner before asking her if she is as dirty as he was.

The Palace confirmed that throughout the lunch the Prince returned repeatedly to Mr Middleton’s early career in aviation.

The spokesman said: “After shaking hands he immediately asked him where the emergency exists are located and when he will be handing out the little plastic headphones.

“He then asked him if his ‘boyfriend’ is also a ‘trolley dolly’.”

The Prince also focused on the northern heritage of both Middletons before explaining to them loudly and slowly the purpose of each piece of cutlery.

The spokesman added: “Nevertheless, Prince Philip was fascinated by Mr Middleton’s career in international aviation and was very keen to find out if he had ever had sex with a Chinese woman.” 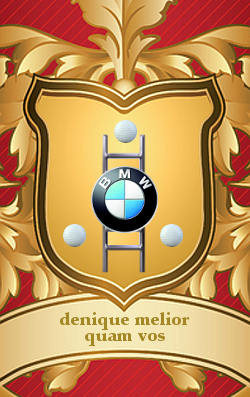 THE Middleton family has unveiled Britain’s most middle class coat of arms.

The heraldic shield, which will be displayed on the back of the Royal Wedding order of service where it belongs, features three golf balls to represent each of the Middleton children.

At its centre is the badge of a BMW X5, representing all that the family holds to be important and worthy of respect.

Running from top to bottom is a ladder, with the golf ball representing Kate at the top of it, in celebration of the family’s triumphant success at social climbing.

After the wedding the coat of arms will be adapted slightly to add a small crown to the ‘Kate’ golf ball.

Heraldic expert Denys Finch-Hatton said: “Getting the coat of arms just right is hugely important to a couple as unremittingly middle class as Michael and Carole Middleton.

“The rampant BMW badge expresses both power and taste. At least it does to them.

“If only there had been room for the cover of a Joanna Trollope novel and a bottle of Cloudy Bay.”