THE Queen wants her jubilee celebrations kept low-key in case people realise the royal thing is a huge scam.

After her six decade reign, the Queen is well aware of what a cushy number she’s got going and does not want to draw attention to it.

She said: “As Queen you have to do some stuff but it is mostly easy, like going to other peoples’ palaces and eating multiple courses of old-fashioned duck dishes cooked in cream.

“But apart from the terrible indigestion, the Queen thing is generally very sweet indeed.

“Sometimes I have to go and look around schools, that’s dull.

“But I get to live in a big-ass house full of pictures of me. When I walk in a room everyone stands up, and I’m like ‘that’s right motherfuckers’.

“So it’s hardly surprising I don’t want any fuss, everyone would want a go.”

Rocky Horror fan despises all it stands for in real life 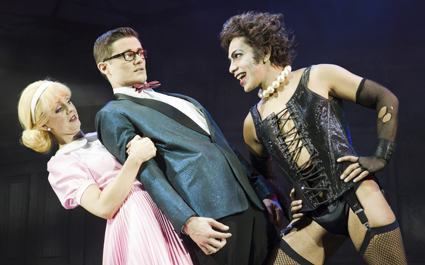 A ROCKY Horror Show fan is actually disgusted by the lifestyles it depicts, he has revealed.

With creator Richard O’Brien joining a new West End run, sales manager Roy Hobbs is looking forward to watching hilarious sexual hi-jinks that would sicken him if they did not involve camp musical aliens.

Hobbs said: “Transsexual transvestite Dr Frank N Furter is a wonderfully outrageous comic creation, but if that pervert tried to touch me up in a gents’ toilet I’d spark him out.

“Similarly the scene where he seduces Brad and he enjoys it is hilarious, but I’m not in favour of gay marriage because God doesn’t like them. Also gays are bound to encourage their children to be gay.

“The character I wouldn’t have a problem with in real life is Magenta in her maid outfit, because that’s a normal, healthy fantasy about seducing lower-ranking employees who are afraid to turn you down.”

He added: “When I see the show I really get into the spirit and go wearing a basque and suspenders, although I keep pointing out I’ve got a wife and kids just in case anyone gets the wrong idea.

“Sometimes I’m curious about what it would be like to be one of these exotic pansexual gender benders, but then I have a cold shower and read Bravo Two Zero.”