A 10-YEAR-OLD has been suspended by her headmaster just for having an obscene anti-school slogan shaved into her hair.

According to Kendall Sheridan’s mother Donna, what should have been a proud day showing off her new ‘FUCK SCHOOL’ hairstyle to friends at Romford’s Northbrook Academy ended with the 14-year-old being cruelly sent home in floods of tears.

Donna said: “Kendall loves to look good, and she’d spent all day with her stylist to come up with something really bold and original that expresses the real her.

“Apparently one of the staff thought it was offensive, but she’s my little girl and I think it looks beautiful. They’re meant to be teachers, not fashion critics.

“She’s at home now, getting no education, and there’s a real danger that she might start running wild. If she does it’s their fault and I’m suing.”

The ban has caused a number of Kendall’s friends and relations to stand around in the street with their arms folded, looking cross.

Meanwhile Kendall has been photographed pretending to be pissed off about not having to go to school.

She said: “They let fifth-formers wear black trainers instead of proper shoes, but when I get ‘FUCK SCHOOL’ shaved into my head apparently it’s a problem.

“Teachers need to learn about fairness.” 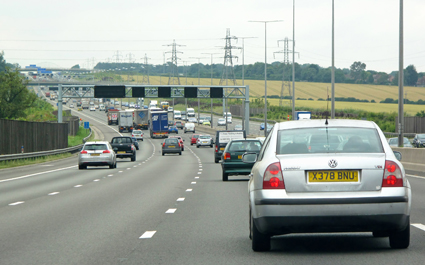 A TAILGATER on the fast lane of the M1 has been shocked to discover another car a short distance ahead of the one that was blocking him.

Nathan Muir, driving a red Alfa Romeo Giulietta, marvelled at the incredible coincidence of multiple cars being driven at about 80mph in the same lane.

He said: “I was cursing the guy ahead of me for tootling along like he’s on a Sunday drive in the Morris Austin back in 1956, but when he finally spots me flashing and hitting the horn I thought this is it, I’m clear all the way to Rugby.

“But no sooner have I floored the accelerator than I almost smash into this second car. I don’t know how it got there, but there it is.

“I can’t wait to get this one shifted out of my way, then I’ll burn like fuck down the fast lane for the next 130 miles like it’s a deserted post-apocalyptic highway.

“There’s no way there could be another car ahead of this one. The universe isn’t that cruel.”