ONLY 13 percent of people who support Boris Johnson are aware that his surname is Johnson.

According to a survey, most of those polled assumed that he did not have a surname at all.

Boris fan Nikki Hollis, said: “That’s what always appealed to me about Boris. He’s not like Cameron and Osborne with their vast, inherited surnames. Boris has made it on his own without a surname.”

She added: “It’s like that Blue Peter dog, Shep. He made it on his own too. Plus he was all shaggy and friendly and, like Boris, not too grand to run after a stick.”

Boris fan Tom Booker said: “We all know the BBC is the Boris Bashing Corporation – if his name was ‘Johnson’, then it’d be the BJBC, so you’re obviously telling lies.” 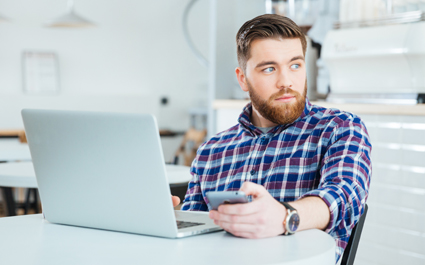 A MAN in a cafe has plugged in his computer and various items of kitchen equipment, it has emerged.

Laptop worker Tom Booker decided that he might want a hot drink or some toast while seated at the table he treats as his private office.

He said: “I like to keep working throughout lunchtime, with my stuff spread out in a passive aggressive manner so that nobody can share the table.

“But of course I don’t want to buy anything, and the cafe owners selfishly do not provide customers with complementary tea-making facilities, so I’ve had to bring a toaster and kettle.

“Some people gave me funny looks but I’ve brought my own teabags so they can fuck off.

“Tomorrow I might bring a microwave but they’re quite heavy to carry.”

He added: “It’s people like me that give this place its fun, silent vibe.”