RETIRED weather girl Ulrika Jonsson has been accused of bathing in the blood of virgins in a desperate bid to prevent chicken neck.

Frightened villagers say Jonsson's craving for youth has led to the disappearance of a dozen local peasant girls in the vicinity of her vast, ominous castle in Surrey.

The colourful rustics believe the former TV star, known locally as 'the Countess', is luring the pretty young virgins with the promise of a Magnum Classic and some amusing Celebrity Big Brother anecdotes.

Once inside the girls are given drugged wine, then lulled into a torpor by the hypnotic lute playing of Olaf, Jonsson's manager and personal dwarf.

They are then grotesquely murdered, in a ritual Jonsson believes will restore her looks to how they were before she had four children by five different footballers.

Menacing local landlord Mikhail said: "Tis true. After some light lesbianism, the Countess offers the poor virgin a bath 'to wash that soot off your face'.

"The peasant girl is then led to the jacuzzi, where she is suspended above the tub and her throat cut as the witch writhes naked in their warm blood. It's not very nice."

Handsome local farmer's son Fyodor blames Ulrika for the disappearance of his 18-year-old sweetheart Alina, and has vowed to claim vengeance.

"The witch will pay for the evil she has wrought upon our village. We shall assail the castle with flaming torches and return its ageing denizen to Z-list celebrity hell."

He added: "That said, she was very sexy on Shooting Stars."

Eastenders Is A Documentary, Insists Johnson 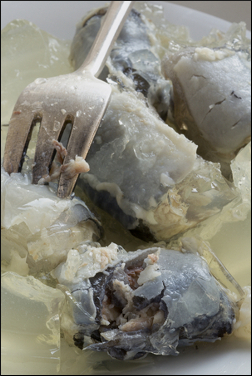 The London mayor has signed-up to appear in at least one episode of the show and said he cannot wait to meet some of the city's most colourful characters.

He added: "I would like to ask Ian Beale what I can do for small businessmen who never really seem to get anywhere and I'd also like to invite Peggy Mitchell to head a mayoral task force on knees-ups.

"And of course I want to pay my condolences to the family of Pauline Beale. Unfortunately I was unable to attend her memorial service because I had to go to the funeral of an actress named Wendy Richard."

Mr Johnson wants to use his appearance on the show to kick start an international campaign to promote jellied food products and raise funds for his pearly king and queen sanctuary.

Meanwhile the mayor's advisors have tried illustrating the show's fictional nature by playing tapes of Dirty Den's resurrection, but this was dismissed as 'nothing more than cockney voodoo magic, as practised by Chas and Dave when they sing 'rabbit' with supernatural speed'.

Emma Gerving, an assistant producer, said: "We have prepared a story line which would see Mr Johnson asking lots of patronising questions before being dragged into the bogs at the Queen Vic and given a right good kicking.

"But if he's absolutely sure it's a documentary then we could make it very convincing."