A BALD man has been gently informed that it is too warm for him to continue wearing a woolly hat, especially indoors.

Tom Logan, who lost all his hair before the end of his twenties and is totally cool about that, habitually wears a woolly hat from the beginning of October to the end of February but is attempting to ignore the unseasonably warm weather.

“Yeah, I guess your head does suffer more from the cold than ours, but come on, Tom. We can see it getting soaked in sweat. It’s not working.

“We haven’t forgotten you’re bald over the last few months. It’s not going to come as a shock to us. We promise we’ll still pity-flirt.”

Logan said: “The cool spring air does feel good flowing over my hairless scalp. Like an awakening. Like freedom.

“Then a pretty girl passes by and I’m at best invisible, more often repulsive, and I need my comfort hat again.” 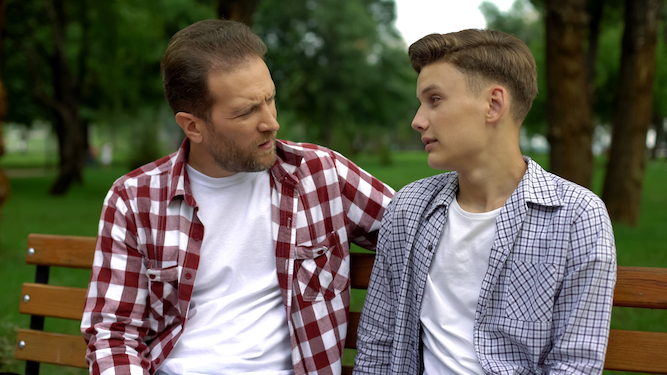 A FATHER trying to explain the ‘facts of life’ to his son is hoplessly confusing him with metaphors about ‘getting one in the back of the net’ and ‘slam dunks’.

Retail manager Stephen Malley decided that the time was right for a frank talk about sex with son Archie, but instead found himself comparing acts of love and intimacy to a League Two play-off between Swindon Town and Morecambe.

Malley said: “We began with consent. That went fine, but then I compared foreplay to building up play from midfield with incisive passes, which to be fair isn’t entirely inaccurate.

“But from there I just fell into a mess of strange analogies that sounded like a horrific hybrid of hardcore pornography and Grandstand.

“I was bandying around phrases like ‘covering all bases’, ‘changing ends’ and ‘fumbling the ball’. At one stage I mentioned ‘batting on a sticky wicket’, which I’m fairly sure was me alluding to homosexuality.

“I know I concluded by saying ‘And, of course, away goals count double,’ before staring at the floor and muttering ‘What?’ to myself. But anyway it’s done now.”