A SUPERMARKET checkout assistant has confirmed she could not care less about your reasons for not bringing reusable shopping bags with you today.

Joanna Kramer, aged 39, estimates she is given at least 20 excuses for buying carrier bags every shift, and does not listen to a single one of them.

She said: “Who am I, the Green police? And if your justification isn’t good enough I’ll make you put all your shopping back?

“It’s like people think I hold them personally responsible for destroying the environment. I’ve been out back where they unload the pallets. I’ve seen plastic waste. A few bags is nothing.

“But still they come at me with ‘oh, my husband’s taken my car with all my bags in it’ and ‘I didn’t know I’d be buying more than one thing’ as if I give a solitary shit.

Shopper Emma Bradford said: “I do care about the environment and love dolphins, but on the way here I saw a poor orphan boy huddled in a doorway so I gave him my bag for life as a bed. Is that good enough?” 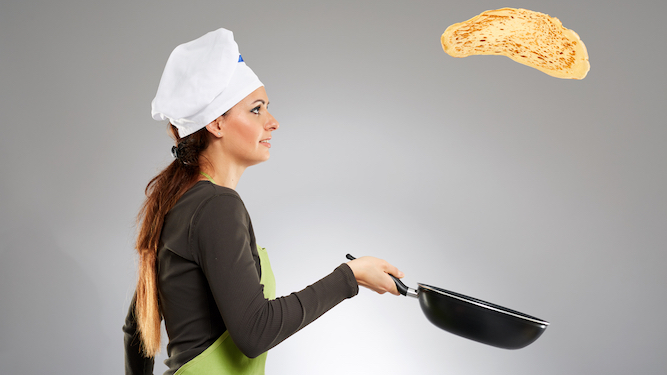 CHILDREN across Britain have been informed that absolutely nobody turns pancakes over by flipping them up in the air and catching them perfectly in the pan.

Parents have gently relieved their offspring of the notion that, in addition to eating unlimited amounts of syrup and cream and calling it a meal, they are going to watch mummy doing kitchen circus tricks for free.

Sue Traherne of Oxford said: “Firstly, the pan’s heavy as a bastard. Second, it’s full of hot fat, so the risk factor is extremely high.

“Third, I’m expected to flip a floppy disc into the air so expertly that it does a single 180-degree rotation while remaining flat and land it back on an area exactly its size? The fuck?

“You don’t ask me to juggle the bread rolls while I’m making sandwiches and rightly so, even though it’d be far easier than this pancake crap.

“Yeah they did it on Peppa Pig. Peppa Pig’s not real, kids. That’s why they didn’t show Daddy Pig losing his shit when charged £118 for a family pass for Potato City.”

Son Charlie Traherne said: “But tossing the pancake’s the only good bit. They don’t taste like anything.”