Guardian thinks women are a team

THE Guardian has decided women are like a big sports team who all women are massive fans of.

The newspaper believes it, and its readership, wholeheartedly support any endeavour by women and that their achievements should be cheered like the Stretford End cheer when Manchester United score a goal.

Guardian journalist Nikki Hollis said: “I’ve just written a piece about a Turkish woman who’s challenged sexist stereotypes by becoming the country’s leading badger-culler. Go women, even though I quite like badgers.

“All women deserve my unquestioning support, whether they’re insufferably boring sportspeople, super-privileged City CEOs or Tories who wouldn’t be noticeably out of place in the SS.

“We also think it’s great when girls beat boys in A-level results. Sure, education’s failing a whole gender, but it’s a victory for our giant team of 33 million people with vaginas.”

Hollis is currently working on a 3,000-word feature about pioneering women that includes profiles of Golda Meir, Samantha Fox and Miss Piggy.

She added: “Sadly I couldn’t find any female cannibal serial killers, but if I could I’d be all ‘Keep chopping those fingers, sisters. Stay strong.’”

What's that bloody thing everyone's watching on their phones? 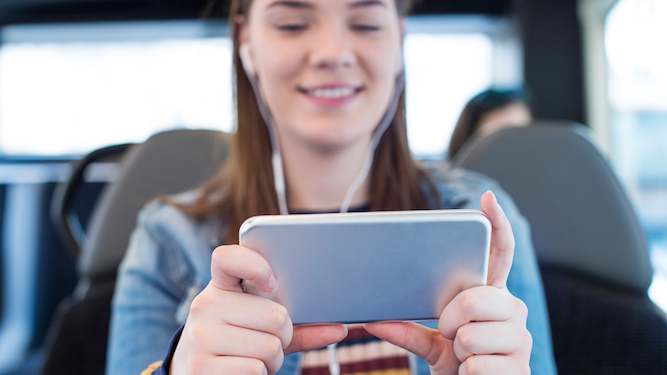 EVERYONE on trains and buses seems to be watching a gripping TV drama, or possibly a film, on their phone. But what the bloody hell is it?

Dull US political drama. Appears weighty but is actually a series of basic lessons on moral issues similar to Star Trek. Watched mainly by morons who want to feel clever and it has attractive people in nice suits.

Undead Walkers Z Nation
Umpteenth reworking of the already-exhausted zombie TV genre, filmed in suspiciously out-of-the-way locations with little obvious damage. On a frankly surprising season four, its fascinating new premise is that the zombies have learned to swim.

Businesspersons
Business comedy-drama with an understandable focus on comedy and drama rather than actual business issues, eg. the company’s digital expansion strategy or a blockage in the ladies’ toilets. Still pretty shit.

Ancient episodes of Frasier
It’s easy to assume people are watching cutting-edge Netflix originals, but often they’re just watching stuff you saw on telly in the 1990s. A tell-tale sign is familiar actors looking normal and healthy and not as if they’ve spent seven years imprisoned in a gym.

Really bad pirate copy of current blockbuster
Unsure what those shadowy, menacing creatures surrounding Aquaman are? Answer: Chinese cinemagoers getting up to buy a Pepsi.