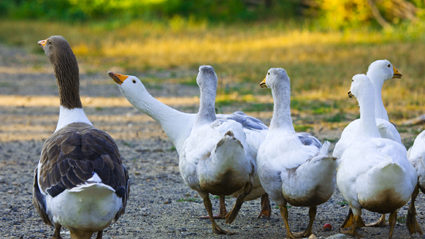 GEESE have been heavily criticised after footage emerged of them walking like Nazis.

The waterfowl were seen in mobile phone footage which showed them marching ‘just like Hitler and his troops’, leading to widespread condemnation on social media.

Twitter user Maggie_92 posted: “My grandad didn’t fly a Spitfire so that pond birds could take the piss.”

However, geese have denied any link to extreme right-wing politics and insist their walking style was based on tradition and the way their legs are attached to their bodies.

However goose Julian Cook said: “Hitler copied this walk from us, just like he stole the swastika from East Asian religious iconography.

“However I do think they should send those grey geese back to Canada. It’s common sense, there just isn’t enough bread here.”

A DELIGHTFUL birthday party enjoyed by a child and his friends totally pissed on all the other kids’ shitty parties, a mother believes.

Donna Sheridan’s son Simon and friends were treated to face painting, clowns and a large inflatable fun slide as part of a bitter ongoing battle for superiority among local parents.

Sheridan said: “The party was expensive but it was well worth it to see all those happy children and show those bitches from the school run who’s boss.

“I’ll never forget the look on Sandra Horton’s face when she saw there was professional catering and not one but three clowns. What did her son Liam have? Pass the parcel with a fucking Twix in it.

“I took some photos – about 300 – because you’ve got to cherish every moment of children growing up. Also I can put them on Facebook and the other mums will be forced to ‘like’ them.

“Best of all the kids all took home a goody bag with an electronic robot or a plush unicorn toy to act as a lasting reminder of my victory.”

Fellow mum Emma Bradford said: “I need to pull something pretty spectacular out of the bag for Ollie’s birthday now. Is it legal for five-year-olds to go skydiving?”