THE unlikely bond between an injured chick and an orang-utan has evolved into a sexual relationship, it emerged last night.

Visitors to London Zoo watched in amazement last week as four-year-old ape Maxwell delicately cradled a tiny baby coot  – which has since been named Blossom – after the abandoned chick tumbled into his enclosure.

Zookeeper Tom Logan said: “Orang-utans are powerful animals and can be aggressively territorial. So seeing Maxwell cup the limp, shivering bird in the palm of his broad hand and offer it a piece of dried fruit was a truly special moment.

“The pair, both orphans, soon became inseparable. Their odd yet affectionate companionship appeared to be proof that animals possess the quality we often describe as ‘humanity’.”

However the following week the two creatures were discovered frantically stimulating each others’ genitals in a bush.

Logan said: “Their relationship has developed in a new and somewhat disconcerting way. Certainly their activities have prompted some awkward questions from school parties.

“On the positive side, the sexual attraction appears to be mutual. It’s not like Maxwell is molesting Blossom. Blossom is very evidently keen.

“Is that positive? I suppose it is.

“Anyway their lovemaking is tender, or certainly as tender as possible given the tremendous size difference. So we let them get on with it.

“I guess the new moral is don’t judge, or something like that.”

Inter-species sexual relationships are rare but not unheard of. In 1993 a cat was filmed wanking off a mouse in a Berlin suburb. 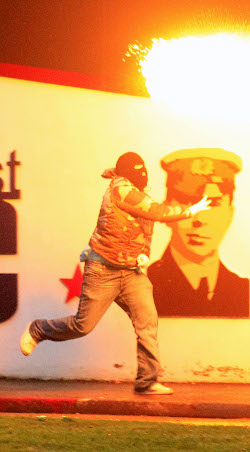 SECTARIAN rioting in Northern Ireland is still far too much fun for all concerned, it was claimed last night.

Experts said there would be no end to the violent clashes without new measures that will take the enjoyment out of throwing petrol bombs at a stranger.

Julian Cook, professor of riot management at Roehampton University, said: “Perhaps we need to develop a new type of petrol that is particularly explosive so that it would be impossible to light a petrol bomb without it taking your head off.

“I believe they did try something similar in the 1980s but it only took off hands and arms and so you just wound up with someone in a balaclava laughing hysterically at their own bloody stump.

“Also, when the riot starts maybe the police should just go on holiday as only the most determined rioters will keep throwing lumps of breeze block at a wall.

“But of course the police will only go on holiday if it includes at least two days of firing tear gas at people. Perhaps we could send them all to Greece for a fortnight?”

He added: “I still favour a huge fleet of blimps blasting out Coldplay and Chris de Burgh until only the deaf remain outdoors.”

There is now growing pressure on the Northern Ireland Assembly to make sectarian violence seem less like a hair-raising ride at the Walt Disney World of Hatred.

But in a historic joint statement, Sinn Fein and the DUP said: “Why on earth would we do that?”