I Brush My Teeth With Coal, Says Brown

COAL is so clean and fresh that the prime minister brushes his teeth with it, Downing Street said last night.

Mr Brown said advances in coal technology meant it was now one of the cleanest substances on Earth, and an unrivalled remover of stains and scaling.

The prime minister is also storing all of his important documents in files made from coal, and using coal to remove dirty marks from his trousers and underpants.

A Downing Street spokesman said: "Coal not only removes stubborn stains and plaque, it's also an excellent source of clean energy. Especially when you set fire to it."

He added: "The prime minister loves the stuff and will often hand round large pieces of coal for ministers to lick at during Cabinet meetings."

Nikki Hollis, an environmentalist, said she was amazed to discover that coal was so clean and tasty compared to other forms of energy.

She said: "I stood next to a wind farm for a second and was covered in soot and ashes while the ground around me was strewn with dying baby rabbits and butterflies coughing up blood.

"Coal fired power stations do emit small amounts of CO2 but, thanks to new technology, you can just scoop it all up with a big spoon and put in a bucket."

've Vill Shoot Zem Only Once' 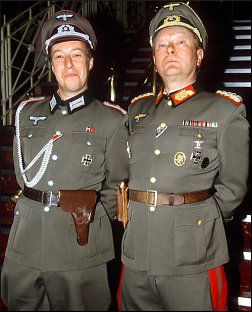 GERMAN television is to show the wartime sitcom Allo, Allo with its raft of comedy catchphrases including: "I will say zis only once: round up all ze men in the village, and machine gun zem into a ditch."

Set in occupied France, the much-loved cast included café owner Rene Artois and the hugely popular Jean Marie de France, the collaborationist mayor best known for his catchphrase: "Get in the train, Jew".

Other popular characters included the lovable Waffen SS commander Colonel "I was only obeying orders" Von Strohm, and the sexy waitress Yvette, who would sleep with any German soldier for a bar of soap and a cigarette.

Their slapstick adventures revolved around attempts to conceal a priceless painting called The Blonde Haired Madonna with the Proud, Aryan Boobies.

One of the best loved episodes involved Rene denouncing his rival café owner as a member of the Resistance after an argument over the best brand of pastis, leading to a summary trial and execution in the town square.

Betina Bunge, of the German TV station 1000-3R, said: "Too often German officers are portrayed as sadistic maniacs, when in fact most of them were harmless, effeminate bozos, who enjoyed a nice glass of Chablis."

She added: "The invasion of France was a happy time for many German soldiers, especially those who hated the sound of enemy gunfire."