THE only thing scarier than a pub with bikers and broken glass outside is that same pub with a ‘Try our new tasting menu’ sign. Here are some cuisines that will make you want to stick to crisps.

‘Street food’ is defined as something small and portable that you can eat without utensils, which this pub has been serving for years in the form of pickled eggs. Putting a tray of microwaved Asda samosas behind the bar is unlikely to lure new customers, especially when they realise they’ll have to consume them while standing next to a man who goes by the name of Nutter.

Despite your dreams of crispy tacos filled with flavourful barbecued lamb, what you’re actually going to get is a plate of Doritos covered in mysterious, boiling hot orange gloop. Essentially it’s an overpriced laxative that will hurt even more when it comes out the other end.

The ethics of being ‘cruelty free’ in a pub known for having a creepy aviary full of mangy birds in the garden is questionable, but they’re having a bash at attracting students from the nearby halls. However, the students are only here for the 2-for-1 spirits and will completely ignore the Quorn nuggets in a basket in favour of a quadruple vodka.

If you’ve heard the bar staff’s take on Brexit, you do not need to taste their take on fusing Greek cuisine with Italian classics. In fact, if you even enquire about the menu they’ll probably tell you to go back to where you come from, despite the fact you went to school with them. The only thing that should be mixed in this pub is the spirits.

Any fish – even a bone dry, beer-battered cod – is not to be trusted in an establishment that thinks Fosters is a premium lager. Best avoided, as ordering the California rolls in this place is an even bigger invitation for death than telling the guy next to you that you think his neck tattoo is ‘a bit girly’. 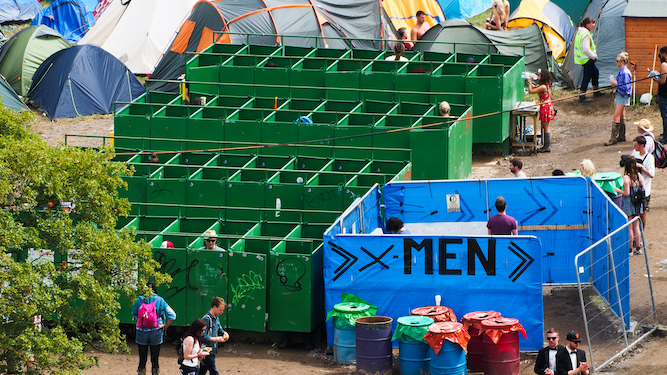 EVERYBODY’S looking for their Glastonbury moment and everyone gets one. But not all of them are positive.

Not losing all your mates in a fun way, being adopted by a drag queen and dancing with strangers to music you’ve never heard before. No, the getting lost after that: it’s 4am, you have no idea where you are or where your tent is, it’s pitch black, your phone’s gone and you start to cry.

Toilets so comprehensively fouled they’re beyond usage are a Glasto tradition, and hilarious in retrospect. They’re less hilarious when you’re backed up with four days of falafel and cider and open a Portaloo door to find it piled high with human excrement.

Getting your stuff trashed

You can’t find your tent. This is ridiculous, why can’t you find your tent? Ah, it’s because it was near someone else’s, and they wanted their mate to camp there, so they simply tore up your tent with all your things in and chucked it on a path where 1,400 people have trampled on it. All part of the fun!

Nobody sees what they intended to see at Glastonbury. That’s what’s so great about it! That’s what you tell yourself anyway, because you couldn’t get within a mile of the stage two hours before Sam Fender and had to watch Khruangbin instead, and they were shite.

Getting shit all over you

Whether mud, rain, lager, urine, or washable paint from an outrageous art group, you’ve got it all over you. And you’ve got to pretend that’s fine because it’s Glastonbury, it’s wild and chaotic, but it’s your favourite top and it’s ruined and you’re cold and you want to cry.

Not even for stuff. Not even a queue with a reward. Just a queue to get from one location to another, spontaneously formed by sheer numbers, that you spend 30 precious minutes in because every f**ker in the world is here and it’s like a fancy Alton Towers.

It’s all over. Kendrick Lamar’s finished, you’ve spent the night in the porch of a stranger’s tent with snakebite-and-black in your matted hair. All you can think about is home. You stagger through the refugee camp the site has become to an endless sea of cars. A steward tells you that things should get moving by 6pm. You openly weep.