HAVING one too many in the pub must do strange things to the taste buds, because it’s the only place where you eat these deranged foods:

The most unappetising snack name in the English language magically becomes mouth-watering once you’ve had a pint. If the fried rind of a pig is acceptable here then where does the madness end? Next you’ll be nibbling on your own toenails and wondering why nobody has cornered the edible human hair market.

You know what fries are, and you have a vague idea that scampi comes from the sea, but these fishy wheat pillows look nothing like either. However, you’re a bit pissed so you don’t give that a second thought as you mindlessly stuff your face. They taste better than sex feels so don’t spoil them by reading the ingredients.

Five bags of assorted crisps all at once

At home you’ve trained yourself to only eat one bag of crisps at a time. But when you get together with your mates you collectively tear open five packets and scoff them with wild abandon like animals. Luckily this haphazard blend of flavours is acceptable in a pub, so you go and buy another seven packets.

Where else in the world would you consider sharing a bowl of nuts that have been sitting out for hours with a bunch of total strangers? Unfortunately you begin to lose your inhibitions after a couple of drinks, and forget that communally dipping into a pile of manky, unhygienic peanuts with people who don’t look the type to wash their hands after visiting a urinal is f**king disgusting.

The very notion of a pickled egg seems perverse and disturbing until you’re six pints in and need something to mop up all that Stella. At this stage a greying, acidic egg that looks like it has been in the jar for two years begins to seem like a Michelin-starred meal, especially if it’s served in a mashed-up bag of cheese and onion crisps. 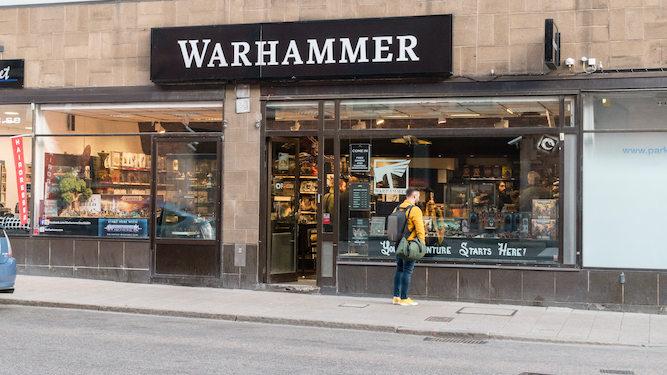 A MAN has been mesmerised by a rotating window display of Warhammer models in the same way people are captivated by pole dancers.

Drooling onlooker Martin Bishop was innocently going about his business when the seductive revolving stand of plastic battle miniatures caught his attention in the window of a Warhammer shop.

He said: “I heard they had these sorts of things on the continent and in Soho, but I never expected to see one in the middle of town. I don’t know whether to be aroused or outraged.

“Just watch that Deathwing Terminator squad led by the Watcher in the Dark go. I reckon they’ve been painted by the ‘Eavy Metal team, which doesn’t come cheap let me tell you. That’s pure class. I’m into it for the artistry, you know?

“And would you look at that Spartan assault tank which can carry 25 power-armoured Space Marines? That’s got to be from the Forge World online store. There’s no way you can buy that over the counter. Christ. I want to look away but I can’t.”

Shop owner Tom Booker said: “Seen something that takes your fancy? We’ve got a special room upstairs where you can be alone with the models. Cash only. Strictly no touching.”