Bastard who's thinner than you saying they need to lose weight

A FAT-SHAMING bastard is moaning about how much they need to lose weight even though they are much thinner than you.

Comparatively slender friend James Bates is making a big deal of counting calories and going for runs to ‘shift the pounds’ while being at least three stone lighter than you are.

He said: “I stood on the scales the other day and my God, I must have put on 11 pounds. That’s when I realised I needed to do something about my obese sack of a body.

“I reckon my increased mass is due to that one slice of chocolate cake I grudgingly ate at your birthday. You gobbled down half a dozen, but we’re not all blessed with your metabolism.

“If I could get away with sporting a beer belly or flabby love handles like you, then believe me I would. But I’m just not built for it. I’d look silly and be conscious that I’m a heaving, sweaty, disgusting blob that women find utterly repellent.”

Bald friend Wayne Hayes said: “He was moaning to me about how unmanageably thick and lustrous his hair was the other week. This twat knows exactly what he’s doing.” 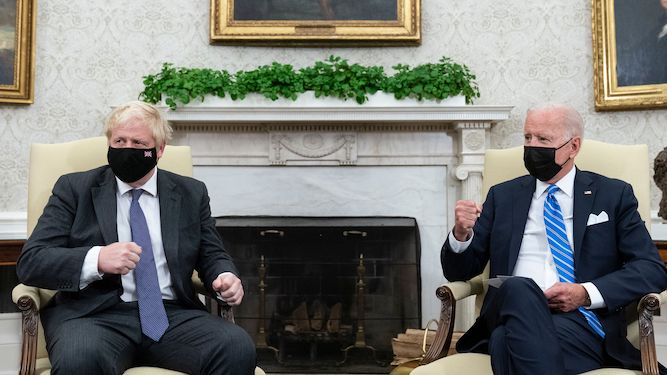 THE president of the United States has been visited by a ghoulish apparition bearing an uncanny resemblance to ‘that dickhead Trump’.

Joe Biden was enjoying a nap when the creature, with its right-wing populism, messed-up haircut and total lack of substance, manifested in the Oval Office.

Biden said: “It was like Trump but if he was on Downton Abbey, you know what I’m saying? Like the prime minister from Love Actually but fat and racist and dead.

“I blinked, which it took as a signal to blather on about trade deals just like that awful orange asshole always did. But all the time you could see right through it.

“I have to say if you’re a rational person you wouldn’t find it convincing. Only credulous fools would fall for it. But there’s an awful lot of them out there, which made the hairs on my neck stand up.

“I pressed my panic button and the Secret Service removed it like it was never there. I admit I was shaken. We checked and Trump’s not dead, just in Florida. I guess we’ll never know what this horrible apparition was. Or care.”

Boris Johnson said: “The special relationship between the UK and the USA is as strong as it’s ever been.”