BRITAIN’S hospitals have been replaced by massive holes in the ground, it has emerged.

As the country was being distracted by the unfunniest display by a standup comedian since ITV’s Show Me The Funny 24 hours earlier, eyewitnesses reported A&E departments up and down the country being bundled into the backs of vans.

Nikki Hollis, who used to live opposite Carlisle General Hospital, said: “I looked out of my window, which faced the paediatrics ward, and I could see these blokes in overalls measuring it up and working out the best place for the Charlie Brooks Kriotherapy Centre.

“The next thing I knew it was being loaded onto a flatbed truck and driven off. I called the police but they said they were busy watching BBC News 24.”

Thousands of bewildered patients are currently wandering near the new craters carrying their grapes and get-well-soon cards in carrier bags looking for somebody to change their IV drips.

Roy Hobbs, a 53-year-old taxi driver recovering from a hernia operation, said: “I must admit that the crater is less crowded, the food’s better and I’m not as worried about catching MRSA.

“I had been wondering who was going to remove my stitches but then I noticed  a jagged piece of pipe where the toilets used to be so I’ll probably just rub them against that until they pop.”

Murdochs know far less about News International than you do 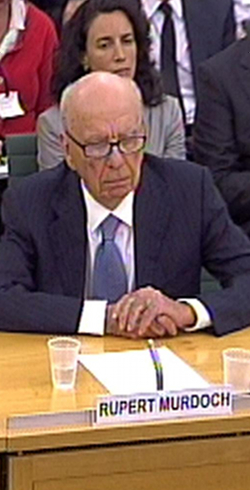 YOU know considerably more about News International than Rupert Murdoch and his son James, it has been confirmed.

As the the two people who run News International on a daily basis appeared before MPs, it emerged that neither of them have ever spoken to anyone who has worked there and have no idea what the company does.

Asked when he knew that News International had paid people to keep schtum about the phone scandal thingy, Rupert Murdoch said: “Do they make those inflatable chairs with the built-in cup holders?”

James Murdoch said: “Mr Chairman, I would just like to say that I have no direct knowledge of me so I can’t speak to that, but I am happy to find out who I am and get back to you in writing.”

Throughout the dramatic hearing it became increasingly clear that Britain’s biggest media company is run by a confused, deaf and possibly drunk old man and an extra from The West Wing.

Tom Logan, from Peterborough, said: “If what I have just seen is a true reflection of the management of News International then I’m surprised the fucking satellites don’t fall out of the sky and my copy of the Sunday Times doesn’t explode in my face.

“Unless, of course, they’re a pair of lying bastards.”

He added: “Can I just say that with all the talk of ‘back doors’ and
‘oral advice’ the whole thing was actually very sexual. Certainly a bit
more sexual than I was expecting.”

Helen Archer, from Hatfield, said: “It will be interesting to see if the committee is able to find out who runs News International, but if they do I’d like them to ask this – ‘Why did your journalists act like c*nts? Is it because you’re a c*nt and you would treat them like c*nts unless they acted like c*nts?’.”

The session was suspended after a foam pie madman tried to cream in Rupert Murdoch’s face.

The
Metropolitan Police said he would be charged with assault and then found
dead of natural causes with one of Mrs Murdoch’s fingernail extensions lodged in the middle
of his forehead.

Rupert Murdoch added: “I would just like to say, this is the most humble day of my life.

“Fuck each and every one of you right up the arse.”