FROM next April all potential users of cannabis will have to sit a government-approved grooviness test.

With experts warning of increasingly potent strains of the drug, the government will tighten the law to ensure it is used only by those groovy enough to handle it.

Government officials predict that the most applicants will be judged 'insufficiently groovy' after a series of tests involving coloured lights, sirens and an angry dog.

Meanwhile excessive users will be told they are now too groovy and be given counselling on how to reduce their grooviness levels.

One government source said: "There are now very few people left alive who have just the right amount of grooviness to handle this kind of shit."

Jacqui Smith, the home secretary, admitted she had used cannabis at university, adding: "I was a very groovy young woman and they were very groovy times."

She stressed she was now insufficiently groovy for cannabis but said she did like to drink an awful lot of wine. 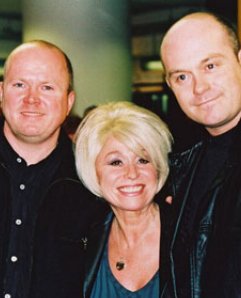 EVERYTHING broadcast across the BBC network is a deliberate and malicious falsehood, director general Mark Thompson confirmed last night.

Thompson apologised to licence payers after an internal investigation found that editors and producers had been making everything up for at least three years.

The admission comes after a BBC documentary about the Queen was exposed as a fake. The producers were denied access to the monarch and instead used a 65 year-old man dressed in a Barbour jacket and a tiara.

Because of budget cuts, said Thompson, BBC cookery programmes have been unable to use real food since 2005 and were instead using ingredients made from mashed-up leaves.

Thompson also revealed that Jonathon Ross, the BBC's highest paid entertainer, was nothing more than a "jumped-up researcher with a dirty mouth".

Meanwhile BBC news will be overhauled after veteran newsreader Peter Sissons was found to be broadcasting his own fictional bulletins, scribbled down hastily at a curry house in Shepherd's Bush.

A BBC insider said: "It all stared with the Andrew Gilligan story about the Iraq dossier. We took such a pounding over something which was substantially true that we thought, 'fuck this for a game of soldiers, let's just make it all up'."

EXPOSING THOSE BBC LIES IN FULL: