KEEN to double down on your mental vaccination theories while reality seems intent on proving them wrong? Try these gambits:

It’s all about future population control

The success of the vaccine is a ruse. It’s designed to kill off huge swathes of the population at some unspecified point in the future. But because you’re unvaccinated you get to live on in an apocalyptic hellscape, beating a man to death with a can of beans in the ruins of Asda. Clever you.

Everyone else is brainwashed

Even though you’ve spent 18 months believing outlandish nonsense written by bored teenagers on obscure Reddit pages, it’s everyone else who’s brainwashed. No doubt by the ‘MSM’, which in your deranged delusions is controlled by George Soros and Ellen Degeneres.

Covid is no worse than the flu

Why vaccinate when Covid’s no worse than a bout of the flu? Well, you might want to ask the four million people worldwide who’ve died of it that. Or indeed ask yourself when you end up in hospital and realise that being wilfully dumb is very bad for your health.

Only social media knows the truth

Reputable news sources reporting too much positive news about the vaccine? Retreat to shadowy corners of YouTube and Twitter, where the true facts are provided by lunatics who found Qanon too mainstream. Did you know the Pfizer jab is reverse-engineered from alien DNA?

Get out there and protest

If all else fails, take to the streets with your fellow anti-vax pals and hit the seat of all power, like a former BBC studio that’s now luxury flats. Perhaps the utter ineptitude of your comrades will help you realise how f**king stupid you’re being. But it won’t. 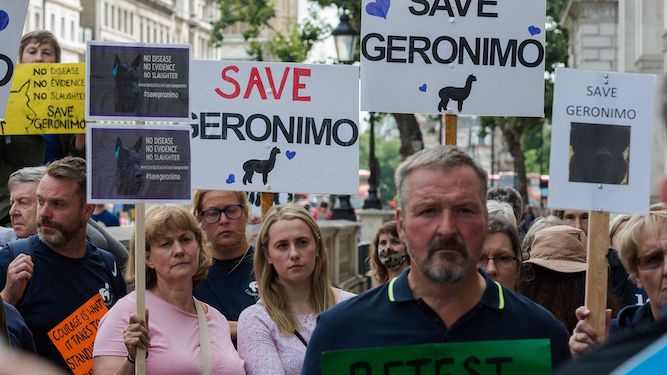 A MAN is unable to decide whether it is more important to fight for the future of humanity or to fight for Geronimo the sad alpaca.

Nathan Muir of Hitchin admits that the UN’s code red for climate extinction does worry him, but not with the same urgency as the plight of a poor alpaca that has done nothing to hurt anyone.

He continued: “The wildfires in Greece, and California, and Siberia are terrifying but ultimately quite far away and sort of cool, like an action movie.

“While Geronimo the alpaca is a lovely woolly fella who faces government execution for no greater crime than failing a test for bovine TB when he’s not even a cow so it doesn’t apply.

“People say ‘if we don’t act on climate change immediately tens of thousands of alpacas will die’ but when I ask their names they don’t even know them.

“They’ve been going on about this warming for ages, they can last a bit longer. Meanwhile if I don’t post frantically about Geronimo on social media this could be his final week. My course is clear.”

Muir has previously decided to postpone action on climate change for Cecil the lion in 2015, Phoenix the foot-and-mouth miracle calf in 2001, and the Tamworth Two in 1998.