JOSEPH is not looking forward to telling three wise men from the East that with the shepherds and the angels they already have a three-bubble gathering.

The stepfather of Jesus had planned a traditional Christmas in a stable in Bethlehem but recognises that, under Covid rules, there is no way a trio of Oriental kings can join the party.

He said: “We were expecting it to be just me and the wife, and of course the ox and the ass, and to be honest we were happy with that. But King Herod’s changed the rules because he hates to look like the bad guy.

“So the shepherds arrived, then the angels of the Lord came down and you can’t really say no, then I looked up and there’s this star directly above the stable and I’m like ‘Uh-oh.’

“They’ve come a long way, they’ve brought gifts, and yes it’s rude to leave them outside but come on. They’re not even one household.

“I know kids can’t usually get it, even more so with his holy radiance, but if the Roman census-takers catch us we’ll be fined 10,000 shekels and I’m a self-employed carpenter.

“I’ll just have to say sorry, there’s no room at the stable attached to the inn, we’re just following yonder science. Maybe Easter?” 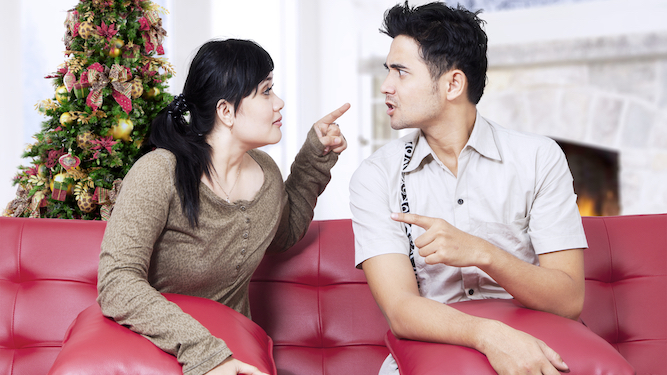 THE latest Sainsbury’s Christmas advert centres around a family of complete arseholes kicking off about Brexit over dinner.

Following controversy over an advert featuring black Britons provocatively enjoying gravy, the new advert will star a family of confrontational pissheads having a massive barney over turkey and all the trimmings.

Viewer Ryan Whittaker said: “As an arsehole myself, it’s important for me to see people I can identify with. And this advert delivers big time.

“From the morning, where they’re watching Paddington 2 and the nan shouts out ‘Go back where you bloody came from!’ to the dad who demands Buck’s Fizz for lunchtime drinks because prosecco’s foreign, it was just like my own Christmases.

“I was in absolute tears when they played Fairytale of New York just so they could shout along with the offensive bits at top volume. So heartwarming.

“Honestly, from the fight over Trivial Pursuit because the dad won’t accept that Boom-a-Bang-Bang was the wrong answer to the 15-year-old son nicking Grandad’s whisky to go down the park with his mates, it was like looking in a mirror.”

A Sainsbury’s spokesperson said: “This family of total bastards who love to fight and complain about everybody and everything really reflects a UK Christmas in 2020.”