Mars bars recalled because they help you do f**k all

MARS bars have been recalled across Europe following the discovery they help consumers to do nothing except become fatter.

After a Mars bar in Germany was found to have a negative effect on the buyer’s ability to work, rest or play, a recall was issued pending further analysis.

Roy Hobbs of Blackburn said: “I’ve been on a Mars every day since November 1985, on what I believed to be official medical advice.

“I’ve lost my job as a bus driver because I’m too obese to fit in the seat and if I kick a football I have to lean against a tree, red-faced and panting. I’ve tried upping the dosage but if anything that made it worse.

“And I’m not sure what claims they’re making for Mars Milk, but after drinking four of them in a row I lay on my bed feeling deeply unwell.”

A Mars spokesman said: “A concentrated hit of sugar makes work, playing with the kids and yet another evening slumped in front of The One Show slightly more bearable, how’s that?

“Or you could have a fun-size Mars, if you want to feel cheated.” 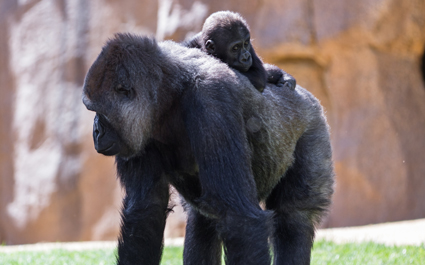 A BRISTOL Zoo-based gorilla mother is under fire after it was claimed she made no effort to have a natural birth.

Mother-of-two Mary Fisher said: “It’s easy to get carried away because baby gorillas are cute, but if Kera was any sort of mother she’d have opted for a natural delivery, like a water birth with candles and some early Cat Stevens.

“Those c-section females are all the same, whatever the species. I bet she partied like a washed-up rock star from the first trimester onwards.”

“Too posh to push and she was puffing away on her Monarch 100s and texting her mates during the entire operation. Once the baby was out she didn’t even try to breastfeed, she just did shots of Jager and played Paddy Power Bingo.

“There’s no way I’d leave my own kids with her.”