Really wanting a kebab not an emergency, Britain told

BRITONS have been reminded that having a strong desire for spicy meat is not a reason to dial 999.

The NHS issued the statement following a weekend of overwhelming calls requesting ambulance services, many of which proved to be from drunk people wanting food delivered.

An NHS spokesman said: “The 999 service exists to help those in urgent need of medical help and does not offer doners, chips or ‘extra fucking hot chili sauce’.

“Also our call centre operatives are not all called ‘Kostos’, nor are they prepared to wait on the line while you ‘just see what everyone else wants’.”

Health secretary Andrew Lansley now plans to change the emergency services’ number to 651042901178054 in a bid to stop drunkards getting through.

He said: “Although this is not a cost-cutting measure, it may also prevent less tenacious sober people getting in touch, which is no terrible thing given that ambulance services will soon be cut to a single Green Goddess and a police community support officer with a box of plasters riding a child’s tricycle.

“However I don’t want to completely rule out selling the ambulance service to a fast food corporation, for example Domino’s Pizza.

“If there was a heart attack in the same household where someone also really wanted a stuffed-crust Meat Feast it would be a win-win situation.

“Alternately I suppose you could wait until they’d eaten the Meat Feast, there’s a fair chance of some palpitations.” 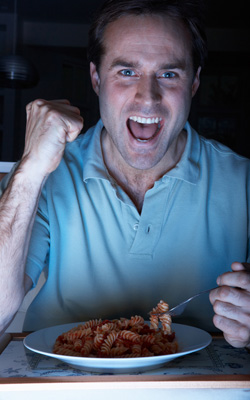 AN unemployed man is scamming the taxpayer out of £67.50 a week, it has emerged.

Former care worker Norman Steele does not have to lift a finger to receive the sum, equivalent to an annual salary of £3,510, which he uses to pay for a lifestyle of utility bills and Lidl sausages.

He spends his time sitting at home filling out job applications, or lounging in front of his 14 full-colour TV.

Steele said: The best part is watching the Secret Millionaire, where the participants get to stay for a week in a flat that is supposed to illustrate grinding poverty but is still bigger and nicer than my place.

The UK’s sizeable embittered population were eager to criticise Steeles perceived ‘like something from Shameless’ benefits bonanza.

Sales manager Wayne Hayes said: For some reason I cant seem to grasp the fact that £67.50 a week is a very small sum of money to live on. This fucker probably drives a top-of-the-range BMW and eats unicorn steaks every day.

Factory worker Carolyn Ryan said: The thought of other people having any amount of pleasure, however minimal, makes me sick. My life is utter shit so I dont see why everyone elses shouldnt be too.

Ms Ryan then used the phrase ‘end of’, as though that in some way validated her argument.

Her friend Emma Bradford said: Some people on the dole are lazy bastards that do fuck all. I know this because I’m one of them.

But that doesn’t stop me having a worthless, vindictive, judgemental opinion, and it is as follows: they should complete at least 900 job applications per day while wearing lead clogs.