RIGHT-WING journalists are scouring the country in a desperate attempt to find anyone who believes in Boris Johnson’s ‘moonshot’.

Media outlets that support the prime minister are frantically searching for any random nutter who will back the plan to test 10 million people a day so they can claim they represent ‘ordinary Britain’.

Journalist Tom Booker said: “We’ve gone through every frothing loony who’s ever called LBC, every letter in green ink we’ve ever received, and all the most unhinged people on Twitter. Nothing.

“So we changed tack. Lefties, we thought. Surely there’s a few of them deluded enough to think that investing massive sums in public health is resurgent Corbynism. We even tried Owen Jones. Another dead end.

“Sadly, Operation Moonshot is such transparent fingers-crossed bollocks that there isn’t a single person in the UK who has an ounce of faith in it for a single moment. Not even Johnson himself. Obviously.”

19-year-old Josh Hudson said: “I’m on LSD, ketamine, DMT and I’ve been smoking skunk for 23 hours straight. I believe I can fly, and that machine elves are singing our world into existence.

“Moonshot? Nah. Come off it mate. That’s a load of cock.”

Hologram of Enoch Powell to headline Festival of Brexit 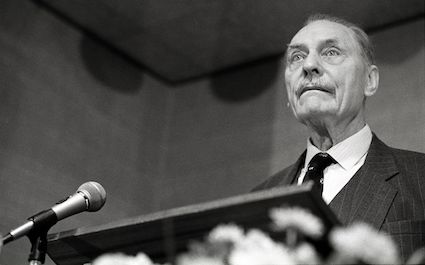 A HOLOGRAPHIC projection of former Conservative MP Enoch Powell will be the headline act at the upcoming Festival of Brexit, the organisers have confirmed.

The divisive political figure famous for his ‘Rivers of Blood’ speech will be reproduced as a giant 3D image at the festival that will bring the country together.

“The big guy will take to the main stage at the end of the festival to recite his infamous speech for the first time since 1968. For fans of Nigel Farage and Nick Griffin, this will be a magical opportunity to learn more about the history of stirring up anti-immigrant feeling.

“Other acts will include a cacophonous bellowing of Rule Britannia that probably won’t be broadcast by the biased BBC, and a real-time electronic display that shows the plummeting value of the pound.

“White people and immigrants with 70 points or more are welcome. But not that welcome.”