Smokers banned from looking at cigarettes while smoking

SMOKERS will have to hold a large piece of card over their face so they cannot look at the cigarette they are smoking, ministers said last night.

The ‘smoking mask’ will include a small mouth hole and a handle, though later models may be fitted with elasticated straps.

From next April, if smokers want to buy cigarettes they will have to uncover them during a day-long treasure hunt using a series of very difficult clues.

Under the new regulations the smokers will then have to store their cigarettes inside a large cereal box containing a cobra.

When they want to smoke they must position the cereal box on a table, strap on their smoking mask and then fumble around inside the box in the hope of finding a cigarette and not the cobra.

The mask will also carry a warning which reads: “Lighting a Cigarette While Wearing This Mask May Cause You to Set Fire to the Mask Instead of the Cigarette and Burn Your Face Off.”

A health department spokesman, said: “The best way to make cigarettes unattractive to children is to hide them in the woods as part of a day-long treasure hunt.”

If Only I Really Was Stuart Little, Says Michael J. Fox 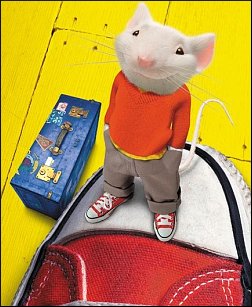 HOLLYWOOD superstar Michael J. Fox last night complained that he would have been cured of his Parkinson’s disease by now if he really was a mouse.

The Stuart Little actor said he was sick of having his paper opened for him only to read about another wonder cure for mice.

Fox said: "We've got a cancer proof mouse, mice that can be cured of diabetes, mice that enjoy eternal youth and now we've found out how to cure 'mouse' Parkinson's.

"Meanwhile I am sitting here shaking so much my fillings are falling out."

He added: "Mice can't even act . They had to call me in to do the voice because the 'real' mouse kept forgetting his lines. I held his hand through the whole thing.

"Now he's running around the place in his little red car, while I'm not even allowed to drive in case I suddenly switch lanes or run over a cat."

Fox complained that life expectancy for mice was now more than double that of the average actor in Hollywood.

He said: "I've even heard that Buddhists are behaving like total shits, just so they can get reincarnated as mice. Fuckin' Buddhists."