America one step closer to realising life is not a film

THE United States has taken another small step towards realising they are not all the stars of some badly written melodrama.

Faint neural connections were achieved in the country’s 300 million brains after it emerged that when the people who run the country talk like a Stephen Seagal character and you give guns to nutters then actual humans get killed in real life.

As the investigation began into the shooting of Congresswoman Gabrielle Giffords and the murder of six others, psychiatrists said America may now be starting to recognise that if you are not on a film set then grabbing a massive pistol and saying ‘let’s dance’ in a deep, croaky voice is terrifying and insane.

Dr Julian Cook, head of geo-cultural psychology at Reading University, added: “When we’re little children we imagine we’re James Bond or the star of a violent war film. We clutch at our chest in fake injury before recovering and killing all the baddies with our high-powered index finger.

“Now imagine a hugely powerful economy where everyone thinks like that every minute of the day and they all have incredibly real guns.”

But Todd Logan, from Minnesota, said: “I was one of the stars of 9-11: Freedom’s Darkest Hour. I played the character who phoned up the White House and told the President he had to kick some ass.

“Then, a few minutes later, you see him contacting me personally through my television to say ‘mission accomplished’ before kissing his wife who we all thought was dead. It was a really great scene.”

He added: “I only have a very minor part in Arizona Takedown – I play ‘Man with Opinion’ – but I am up for a big role in How Todd Logan Succeeds in Business Without Really Trying.”

Meanwhile Sarah Palin, star of Lock and Load: The Sarah Palin Story, has insisted that gun sights can be used for all kinds of things, such as baking, jam making and homeopathic medicine.

As she came under attack for publishing a map which showed rifle crosshairs over Gabrielle Giffords’ congressional district, Palin rejected claims she had promoted violence and said gun sights are rarely used in conjunction with guns.

She said: “I actually bought the sight for my R-15 Bushmaster semi-automatic hunting rifle as an attachment for my bread maker.

“Once you’ve removed the glass and the bolts you can use it as a funnel for adding chocolate chips or little pieces of marshmallow.”

Beckham accused of sleeping with wife 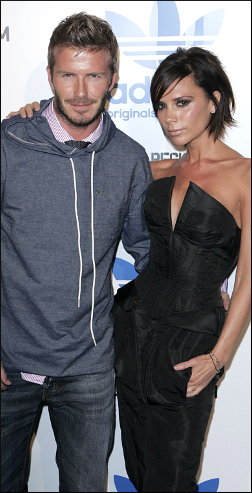 DAVID Beckham is fighting to save his reputation after claims he has been to bed with his pointy wife.

Sources close to the couple said Victoria no longer requires tethering to the floor during windy weather, fuelling speculation that another dress-up doll named after the place where they fucked may be on the way.

An insider said: “Between not playing football in America and making Harry Redknapp look like a salivating, crotch-rubbing pervert in a grimy strip club, he simply hasn’t had the time to get drunk enough for that kind of thing.

“If you watch recent footage of him at the Sports Personality of the Year, he looks relaxed and happy, rather than having the haunted Vietnam-vet face of someone who had recently been adjacent to the world’s pointiest, most miserable fandango.”

Beckham is now considering an injunction against his wife, banning her from further accusations of consummated fidelity.

Meanwhile analysts have warned that Victoria’s allegations will damage ‘brand Beckham’ which generates millions every year as companies queue up to have their products endorsed by a badly tattooed simpleton who sounds like an Eastenders actress.

The insider added; “Victoria decided that having sex with your husband is this season’s ‘must have’.

“I just hope it all blows over and they can return to being the sexless, joyless couple, the extent of whose fame we will never really understand.”