BELFAST councillors hope to prevent further rioting by replacing the union flag with a bizarre image of Benedict Cumberbatch embracing a dolphin.

The city’s current unrest was sparked by the councils decision to fly the union flag only when the Queen might be looking.

In a bid to quell tensions, Belfast councillors have adopted an alternative flag depicting Benedict Cumberbatch canoodling an aquatic mammal.

Councillor Mary Fisher said: We did consider a few other designs before settling on this one  two kittens and a pair of tits, Rizzle Kicks on fire, and my favourite, David Attenborough eating a Bounty.

“But the Sherlock/dolphin combination is uniquely endearing and engenders nothing but good feeling.

“We also feel it’s a major leap forward in flag design, as let’s face it they mostly look like ZX Spectrum ‘loading’ screens.”

Councillor Stephen Malley added: The new flag is surprisingly arousing.  When people see it, instead of throwing bottles at the police, they usually want some private time at home.

However, hopes for a peaceful night in Belfast may prove short-lived.  An army of Doctor Who fans is marching on the city, outraged that their icon has been overlooked.

One fan said yesterday: In Doctor Whos fiftieth anniversary year, only one man should be on a flag kissing a dolphin, and that is Matt Smith, or possibly Tom Baker.

“By the time weve finished with them, Belfast is going to look like Skaro, the war-ravaged home planet of the Daleks.

Hollywood 'living in some sort of fantasy world' 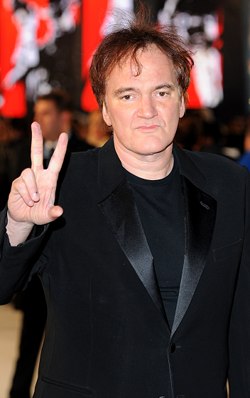 HOLLYWOOD’S denial of a link between movie violence and gun murder suggests it may be living in some sort of made-up, fantasy world, experts have claimed.

Research by the Institute for Studies found that more than 90 per cent of actors, directors and producers believed they were living in an entirely separate universe where cause and effect can be whatever they want it to be.

Professor Henry Brubaker said: “It’s almost as if they spend all their time making things up.

“So it means that when something comes along that doesn’t quite fit into their universe they just send to back for a re-write until it makes ‘sense’.”

He added: “For instance, if you watch Quentin Tarantino being interviewed by Krishnan Guru-Murthy about movie violence he is utterly convincing.

“He has written a script in which there is no way he even suspects there is the slightest link between real gun violence and a popular culture that is absolutely and continually drenched in fictional gun violence.

“Also, in the script everyone thinks he is incredibly likeable and not remotely cynical, self-serving and manipulative.”

But liberal activist and star of Gangster Squad, Sean Penn, said it was important to draw a line between fact and fiction, adding: “I always want my performance to be believable, except the bit where I have a gun.

“I don’t want you to believe that bit.”