Britain needs coffee and a fag before reading about Trump again

BRITAIN has said it will catch up with the latest Trump news after some strong stimulants.

The second presidential debate was held in the early hours of the morning in the UK, when the population was asleep, dreaming of versions of the event that were reassuringly sane.

Nikki Hollis, from Peterborough, said: “It’s Monday, I spent the weekend looking after a child with gastric flu and Liam Fox still has a direct influence over my quality of life, Maybe one thing at a time, eh?

“Was he still sniffing like a 1970s disco producer with a head cold? How about we start with that.”

Analyst Tom Logan said: “Possibly after lunch, once everyone’s cleared their emails and looked at something utterly inane on Facebook.

“Did he do some creepy press conference with Bill Clinton’s alleged victims? Actually no, don’t tell me. I’m nowhere near ready.”

Farage to school Trump in the art of seduction 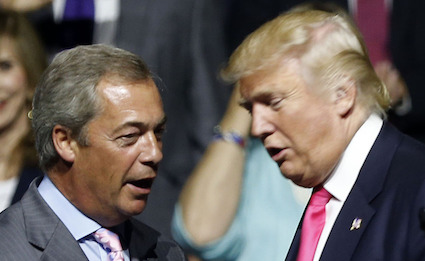 NIGEL Farage is to rescue Donald Trump’s campaign by training the Republican candidate in the art of seduction.

The interim UKIP leader has told Trump he needs to win the respect and trust of women voters and can only do so if he becomes a ‘grand master in the ways of love’.

Farage said: “I am very popular with the ladies. And it’s not just because I’m incredibly handsome and have a voice as smooth as chocolate milk. I also know how to woo.

“It’s a secret method as old as love itself and it only cost me eighty quid.”

He added: “It’s basically a series of booklets with really good pictures and lots of tips about aftershave. The first one comes with a free DVD.”

Farage refused to give more details, but said the first lesson is entitled ‘The Great British Fanny’.