After the newly-elected premiers plane was struck by lightning, an interim government consisting of clouds was proposed by Hollande in a bid to appease Frances sky-based overlord.

Hollande said: We will have the list of buildings known to have lightning conductors ready for our new leader as soon as possible and will, of course, be dismantling the Eiffel tower.

Im heading for Asgard in a wooden vehicle with a ceremonial hammer to hand over the reins of power just as soon as weve established where it is. I hope the suggestion its near Iceland proves to be incorrect as I dont fancy making the trip by longboat.

This will be the first time France has been under the rule of a mythical figure since 1881 when President Jules Grévy fell ill after eating some chocolate and immediately surrendered to the Easter Bunny in a period known as the Floppy-Eared Republic.

Austerity measures put in place by President Sarkozy will be drastically altered by the new Norse rule, with the building of feasting halls in every town and a new national sport of cutting the braids of wenches with a throwing axe.

Productivity may also be affected as every day in the calendar is changed to Thors-day, meaning workers will permanently feel it is nearly the weekend and time to start winding down a bit.

Hollande added: We have all seen the terrible foreign policy proposed by Loki in Avengers Assemble so the protection of Thor is very much in the interests of France. During our first meeting I will also be looking into the possibility that Hulk smash puny Merkel.

Dalai Lama goes off on one about sales calls 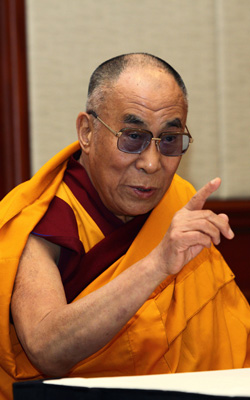 TIBET’S spiritual leader has delivered an extraordinary rant about the things that do his head in.

The Dalai Lama’s rare display of belligerent human frailty occurred in London, during an acceptance speech for the Templeton Prize for ‘affirming life’s spiritual dimension’.

He said: “I am not a special person. I spend my days mostly in quiet contemplation.

“It is during these moments, when I am tantalisingly close to nirvana, that the phone always rings.

“‘He’s not in,’ I always reply, because it is fine to lie in these situations, ‘and if he was he wouldn’t be interested.’

“Then they go, ‘surely he’d be interested on saving 25% on his monthly heating bills with double glazing’. For Zen’s sake!

“I try not to hold it against them because they don’t get paid much but seriously, I mean, Buddha H Buddha, what is up with that? I suppose it’s the bosses you have to blame.

“They always used to get after my nan. One time they convinced her to have a rep round. She only said yes because she’s lonely. I hope they get reincarnated as yak testes.

“Sorry, I know it’s not a big deal compared to world peace, the thing with China etc but I can’t help it. Pfft!”

He added: “Also when you’re in a newsagent at the train station and they’re like, ‘Can I interest you in a big Mint Aero for £1?’ No you can’t, if I wanted one I’d have asked and that’s not even a particularly good deal.”