How to convince the EU you really, really want a No Deal Brexit

YOU’RE in talks with the EU about a trade deal, as you have been for four years, but need to convince them you don’t actually want one. How do you do it?

Tell everyone you don’t want a deal loudly, so they overhear

While still trying to get a deal in talks, loudly tell all your friends in the newspapers actually not having a deal is the best deal of all and really you want that and you’re totally prepared for it. The EU will hear you and be convinced.

Appointing one of Rupert Murdoch’s mates as trade negotiator who says ‘no way mate’ to any attempt to compromise really gets the message across. It’s like when we send someone crap to Eurovision to show our contempt for it, then lose.

Introduce a load of bills stamping all over the agreement you signed last year to fool the EU into thinking you’ve already decided against a deal and are only still in talks to be polite.

Set an unrealistically early deadline and proclaim that it is the final deadline, that no other deadlines will be considered, and if it’s passed then it’s all over and there is no possibility of going back, just like you did twice this time last year.

Order Britain’s fish back to our waters

Issue a proclamation to Britain’s fish to return to our territorial waters before the deadline to make sure they’re not trapped in dirty non-sovereign French water when it all happens. Warn them that defecting would be considered an act of war.

Perform Wannabe by the Spice Girls, but replace ‘zig-a-zig-aah’ with ‘no deal Brexit’

Launch into a beautifully choreographed rendition of Wannabe with all the lyrics rewritten to reflect how much you ‘really, really want’ a no-deal Brexit. Gary Barlow will do you a draft, he’s one of us.

Finally, making clear that you’re only doing it as a favour to the EU, grudgingly accept the same deal that’s been on the table since 2016 and tell all your mates in the newspapers it’s a triumph for Britain up there with Dunkirk. Bask in the glory.

Five elaborate sex positions that will destroy your love life 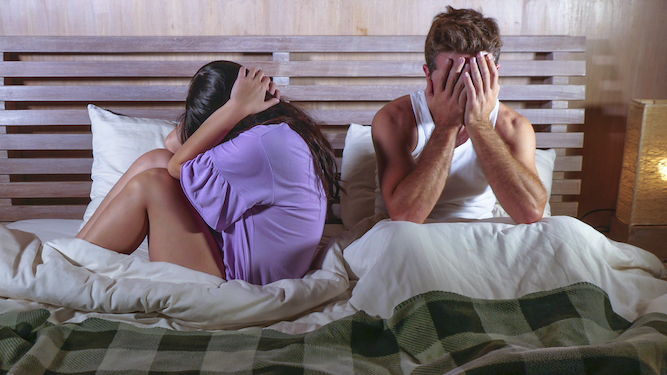 LOOKING to spice things up in the bedroom? Try these acrobatic and performative positions that will leave your partner wondering what they see in you.

The ‘that’s me done’

This popular position sees one of the participants selfishly achieve a sexual climax before rolling off and falling asleep without satisfying their partner. It’s almost forgivable once in a while but for maximum impact make this a staple of your very limited repertoire.

Trying to copy the positions of professional sex contortionists is bound to end in failure. And not the sort of failure you can both laugh off in the moment, the humiliating kind of failure which will necessitate a trip to casualty and a swift break up.

In this scenario one of you plays the person who’s had a long day at work and really just wants to watch telly, while the other party makes pathetically needy and unattractive advances. You might even be doing this one already without realising it.

Such a carnal position that all trace of it has been scrubbed from the internet. It’s too much even for the dark web, and if you find someone who’s up for performing this depraved act you should run for the hills and change your identity so they never find you.

A strict routine of slow, pneumatic pistoning that lasts between nine to ten minutes will really take the fun out of getting hot and heavy. Sure, it might seem enjoyable at first, but if you do this and only this three times a week for five years you should start to see a result, which is likely to be divorce.