A WOMAN’S elderly parents have set out on a quest to replace a non-stick frying pan which could take weeks or even years.

Donna Sheridan’s mum and dad reluctantly accepted that the pan – worth £8 – was no longer functioning properly after several weeks of monitoring its ability to prevent fried eggs sticking.

Sheridan said: “There was a sombre atmosphere in the house, like a bereavement. But I know from past experience that what is to follow will be far worse.

“Mum looked at similar frying pans in Sainsbury’s last week, but didn’t want to ‘take the plunge’. Instead she thought it best to discuss it with dad, which so far has taken about three hours over several nights.

“They spent the weekend comparing frying pans on Amazon, Homebase and John Lewis, but now they’ve gone off the idea of buying one online because of Russian hackers.

“Where we’re at now pan-wise is a tentative plan to go to the big Asda 15 miles away. Although last night they did a lot of soul-searching about whether they should be eating fried breakfasts at all.”

Sheridan’s mum has now put the purchase on hold while she asks her sister Barbara what sort of frying pan she owns, at which point Donna went into the garden and screamed. 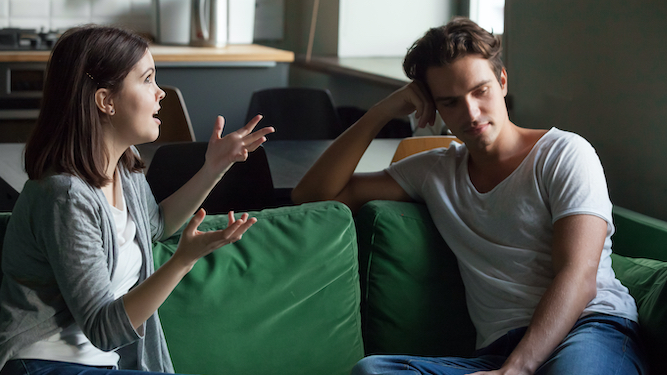 DID you just ask someone how they’re feeling and now they’re actually telling you? Quash the conversation sharpish with these tips:

Set fire to yourself

By engulfing yourself in flames you’ll quickly find you’re both talking about pressing new topics, such as ‘Oh my god, you’re on fire’, ‘Doesn’t it hurt that you’re on fire?’ and ‘Why the f**k did you set yourself on fire?’ Don’t talk about how self-immolation makes you feel or you’re back to square one.

The more nonsensical the better. If your friend has started talking about how their messy divorce is getting them down, nod and then ask them if they think we’ll ever go to the moon again. Do this a few times and they should pipe down, or hopefully walk away altogether.

Pretend you saw a UFO

Cutting someone off mid-sentence is fine if you think you just saw a spaceship flying overhead. It doesn’t matter that they don’t exist: pretending they do is way more fun than talking about boring old emotions.

Find out if laughter is the best medicine by testing it out on their ennui, then brush the whole uncomfortable situation under the carpet by saying ‘awk-ward’ in a silly voice. If you’re already close with this person, feel free to use the more colloquial ‘awks’.

Bring up your own feelings

If they still haven’t realised you don’t care, it’s time to fight fire with fire. Instead of responding to their petty grievances with sympathetic noises, start talking about how you’ve never really been in love and worry about dying alone. They should immediately course-correct, but there’s a risk they might set themselves alight. Either way you win.