Iran better not f*ck me around today, warns cigarette-free Obama

GIVING up smoking has put Barack Obama in the mood to launch a few warheads, it emerged last night. At an impromptu press conference seemingly arranged as an excuse to have a go at someone, the harried-looking US president warned Iran and North Korea that this would be a really, really, bad time to pull any of their shit.

He said: “I want to send a clear message to all potential agitators, any enemies of freedom – I am on the Nicorette gums. And frankly, they don’t seem to be doing a whole fat fucking lot of good.

“Also Allen Carr’s ‘Easyway’ is not living up to its name.

“So if we send weapons inspectors to your godforsaken country in the next few days, you’d better fucking let them in.

“And don’t even think of trying that oh-we’re-just-testing-some-missiles-in-the-ocean-to-see-what-happens antagonistic brinkmanship bullshit. Unless you like the idea of everything you’ve ever known or loved being atomically fried.

“Because believe me, those nukes will be heading your way in less time than it would take smoke a lovely, juicy full fat Marlboro that smells better, richer, more invigorating than a cedar wood forest after a late spring shower.

“Maybe in a few weeks’ time I’ll turn a blind eye to your crap. Right now though, I am drinking a lot of coffee, I’m not sleeping and the only thing keeping my smoke hand busy is the big red button it keeps tapping on.”

He added: “Any of you idiots want to ask a fucking question?” 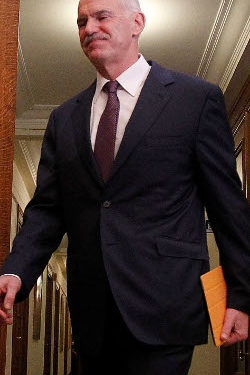 GEORGE Papandreou may be trying to con Europe with the short grift, experts have claimed. As the Greek prime minister ‘convinced’ his cabinet to back a referendum on a massive bailout, experts said the move was quite clearly designed to scam even more money from the European Union.

Julian Cook, chief scamologist at Donnelly-McPartlin, said: “It’s textbook stuff. You join a single currency and then borrow a sum of money so huge that it endangers the entire system.

“The other countries offer to bail you out because if they don’t then everyone is ruined, but then you wait until the last possible minute and ask for more cash or ‘you’ll have to have a referendum’.

“The other countries know they can’t let you have the referendum unless you’re definitely going to vote ‘yes’ and so they pony up with the dough.

“Meanwhile, those dumb saps at the Daily Telegraph unwittingly help you along by saying it’s ‘a great day for democracy’. Beautiful.”

Nathan Muir, a retired bunco artist, said: “It’s called the Albuquerque Two-Step. Old Mickey Five-Knees used it all the time back in the Forties.

“I wouldn’t be surprised if the whole country’s in on it.

“I’ll tell you what though, this Papandreou guy has got some serious hustle. Between the two of us we could clean up, maybe pick a small town and then go door to door selling shares in a free-range haggis farm.”

He added: “I love the fact the Greeks fired all their top generals at the same time, making everyone think the country is on the brink of a violent military coup.

“It’s the sort of wit and panache that you used to see in this game all the time. These days it’s all just payment protection insurance and homeopathy.”