A NEW statue of Ronald Reagan will depict the late president forgetting one of the illegal things he did.

The memorial, to be unveiled outside the US embassy in London, will show the president with a confused, faraway look on his face, as if he had never heard the name Oliver North in his life.

Sculpture expert Roy Hobbs said: “Reagan was a man who loved to forget, at first purely by choice and then because of a brain that had been rotted by years of nauseating deceit.

He added: “Perhaps the look of forgetfulness will be so powerful as to make all who gaze upon it forget that communism did not collapse because of Reagan, but because it was a load of shit.”

Meanwhile, it is hoped that Reagan’s long-time political sex partner Baroness Thatcher will attend, as long as she promises to behave herself.

A source said: “We’re worried she will clamber out of her seat, make a beeline for the statue and then fiddle pointlessly at the groin area, looking for  a zip.

“Best case scenario is she unfolds a deck chair and just sits next to it for the rest of the day, reminiscing about gay persecution and demanding more whisky.”

As a mark of respect to the former president, for today only, all memorials in London to the late Princess Diana will have their names changed to ‘David’.

Newsnight to focus more on what's happening in Essex 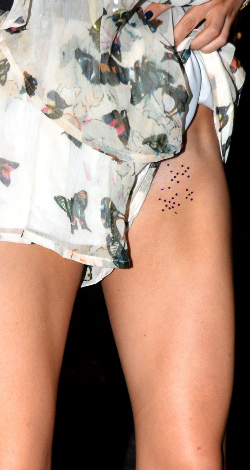 THE BBC hopes to boost the ratings of Newsnight by switching its
editorial focus towards tanning and genital decoration in Essex.

The decision has been made after ratings figures showed that BBC2’s veteran news magazine was pulling audiences of less than 200,000 with its offering of seriousness, complexity and old men getting cross with each other.

A BBC spokesman said: “Our previous attempts at ‘dumbing down’ have, it seems, consistently overestimated the true extent of slack-jawed, cod-eyed, Dorito-clutching stupidity.

“Hence the decison to focus exclusively on what’s up in Brentwood with particular emphasis on the Sugar Hut nightclub.”

In the first edition of Essexnight, Jeremy Paxman will be joined by a group of random girls to discuss how to deal with people who are two-faced.

Meanwhile Kirsty Wark will get a vajazzle and Gavin Esler is investigating which clubs are letting mingers into their VIP areas.

The spokesman added: “Dane Bowers, formerly of chart sensation Another Level, will be joining the studio team as resident DJ, providing a background mix of funky uplifting house, sleek r’n’b and a smattering of dance classics during the shows.

“He might also chip in with some observations about what it was like to put his foot up Jordan’s fanny.

“Guests will be vetted according to looks and wealth but some politicians may be allowed on if they have gossip or they can prove that they know a footballer.

“The only slight problem is that Jeremy will probably have to ask all his guests the same question 19 times in a row.”

Under the new regime, market updates will be replaced with ‘Marbs Updates’, detailing who has been looking a bit porky in Marbella that day.