We don't get any aid, says president of Bongobongoland

BONGOBONGOLAND last night insisted it has never received a penny in international aid.

The country’s president spoke out after UKIP MEP Godfrey Bloom claimed all of Britain’s £11bn aid budget was being sent to the small west African nation.

President Brian Inkatwe said: “We get by on our own. I think it’s because no-one actually believes we exist.

“I have written to the UN on several occasions asking them if they could give us advice on starting a rural banking scheme, but every time they write back and tell me that the phrase ‘Bongobongoland’ is horribly racist and that I should stop wasting their time.

“Some aid would be nice as our economy has suffered since Chinese factories started pumping out cut price bongos.”

Bongobongoland sits between Liberia and the Ivory Coast and was a British colony until 1959. When it was granted independence everyone in Britain assumed the news reports referred to the entire African continent.

President Inkatwe added: “Our neighbours in Liberia receive some aid money and as far as I can tell most of it does actually get spent on making people’s lives  just a tiny bit better. Not as good as yours or Godfrey Bloom’s obviously, but just not horrible all the time.

“No doubt some of it gets siphoned off and spent on fancy sunglasses, but people are shits wherever you go.

“Except Britain of course. Everyone in Britain is just fucking brilliant.”

Charities told to stop being a bit weird 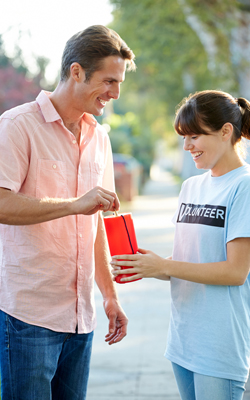 CHARITIES have been told to start being likeable again.

Falling charity donations have been linked to questionable executive pay, an obsession with direct debits and pretending all the stuff in their shops is antique.

Plumber Roy Hobbs said: “Despite what my local charity shop thinks, a James Last record is not worth a fiver.

“I like the idea of helping good causes but stopped going in charity shops when they stopped being interesting heaps of bric-a-bric and became shit versions of normal shops.

“And as much as I hate it, I’ve developed a certain resentment towards underprivileged children, as I associate them with clipboard-wielding dreadlocks owners who bang on my door during teatime.

“Don’t even get me started about those Australian people who stop you in the street and pester you until you become a person you don’t want to be.

“Actually I am slightly shocked to realise charities are getting on my tits. Am I a bad person?

“I would happily chuck a pound note into a bucket in exchange for a poor quality sticker, like in the old days.”

Mother-of-two Emma Bradford said: “I don’t know how much the people running charities are getting paid but they seem to be making a dogs’ breakfast of it.

“I used to go to charity shops because I am poor and they sold cheap things – which is a form of charity when you think about it.

“But for their information, a two-year-old dress from Primark is not ‘vintage’. And no I don’t want to buy a muesli bar, they’re vile.”