THE UN secretary general has written to the prime minister of Thailand asking why they don't just eat toasted sandwiches.

Concern is growing in the international community after reports Thailand was drowning rats and then deep frying them as a mid-afternoon snack.

In his letter to the prime minister, UN chief Ban Ki-Moon said: "Honourable friend, are you experiencing shortages? Has there been a problem with the harvest? If so the United Nations stands ready to help the proud people of Thailand.

"But if not, then we're all really quite curious as to why you've taken to devouring deep-fried rats. Is there a new superfood I don't know about?

"I'm sure you've already thought of this, but here's an idea: Why not just make yourself a nice sandwich?

"Maybe some cheese or ham, a spoonful of chutney, a couple of bits of lettuce if you're feeling all healthy. I'll tell you what, my mouth's watering just thinking about it. Mmmmmm.

"And if you've got time – or if you're feeling a bit adventurous – you could even bung it in a toastie maker.

"It only takes a couple of minutes and it comes out piping hit and oozing cheese. Goodness me, what a treat."

He added: "I enclose a brochure for the Breville TR46, which is an excellent entry level machine and surprisingly easy to keep clean." 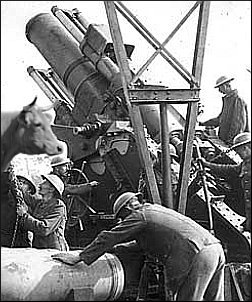 THE British Army is to phase out the practice of firing goats into walls, the Ministry of Defence announced last night.

In the last decade more than 3,000 goats have been shot into hard surfaces by soldiers curious to see what kind of patterns they would form.

Brigadier General Denys Finch-Hatton said the long standing army tradition was developed to give soldiers an outlet for their more creative side.

He said: “We tried finger painting but it did not seem to have the same effect, and it was quite difficult to get a steady supply of fingers.

“The goats create a rich textured effect, a shimmering mosaic of teeth, hair and blood. If I had to describe it I’d say it was like Jackson Pollock crossed with a polar bear.”

British soldiers first started firing animals from guns in the mid 18th Century when muskets were used to propel baby mice into doors.

Animal firing remained limited to single shot rifles until the invention of the multi-barrelled Gattling Gun which was capable of shooting out 400 kittens a minute.

The army then turned its attention to large mammals with its most notable success being the construction of a howitzer during the First World War which was capable of blasting a cow over the channel.

“Thousands of people used to turn up every Sunday to watch them fire a Friesian over to Dieppe,” the General said.

During the Second World War large animal firings continued to be used for entertainment and morale boosting purposes by the Allied forces.

However, the Nazis developed a series of long-range terror weapons which they used against civilians, including a V2 rocket with a specially sharpened antelope strapped to the top.