Britain's full of British wankers: the problem with staycations

HOLIDAYED at home this year? Here’s why you hated it:

There were British wankers everywhere

One of the benefits of a foreign holiday is getting away from the completely f**king awful British public. Not on a staycation. No, you might have found a Fanta Lemon to sip peacefully on a British beach but two metres away are an extremely loud family of eight from Preston, a Scottish pensioner in Speedos and a billion feral seagulls.

It cost more than the Seychelles

With inflation and all, you could forgive owners for nudging their prices up a bit. But, instead, they decided to utterly take the piss. Smash the piggybank, cash in those shares and remortgage: it now costs more for a B&B in Torquay than a luxury hotel on an exotic archipelago in the Indian Ocean.

If, like a normal person, you left it to the last second to book your break, you’ll have discovered everywhere good got snapped up 12 months ago. But it’s the summer holidays. You will not be defeated. You have to get away. Even if it means an entire fortnight exploring the majestic wonders of Hull.

You understand exactly what you’re spending

On proper holidays you’re never quite sure what things cost. Sadly there’s no exciting foreign currency you can spend like Monopoly money over here, no krona or pesos or dollars, just pounds and pence. So you know what that round of ice creams just cost you and it was sixteen bloody quid.

You can’t show anyone your blue passport

One side effect of a UK holiday is that, disappointingly, you won’t be able to show anyone your fancy new blue passport. Meaning it’ll be next summer before many Brexiters can slap it down on the desk at passport control with a twinkle in their eye that says ‘We’ve got our country back’, before pissing off somewhere nicer.

Child to be sewn into new school jumper 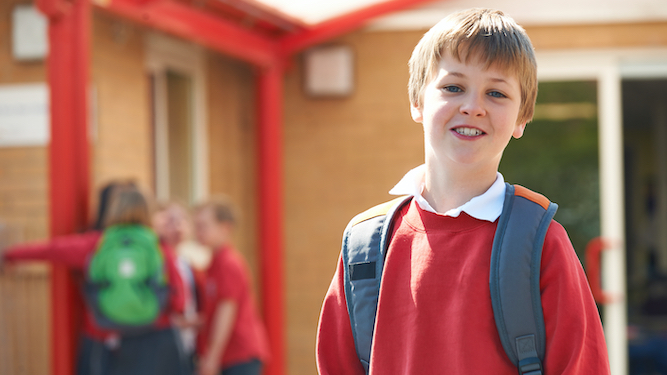 PARENTS of a child known for losing school clothing have decided to have him permanently sewn into his new school jumper.

Nine-year-old Joshua Hudson has proved himself so incapable of holding onto his expensive uniform that his mum and dad have elected to make it non-removable.

Martin Hudson said: “He just isn’t capable of bringing his jumper home with him. We’ll be out at all hours, trawling playing fields, corner shops and local quarries. It’s the most valuable thing we own, apart from the car.

“The few times he thinks he does have it safely in his bag, it turns out to be something that is obviously not a school jumper, like some girl’s jacket or a bin liner.

“So he’ll wear it all the time now, every day, like a cartoon character. Yes, he’ll have to wear it in the bath but we’ll give him a run around outside afterwards and he’ll be dry in no time.”

Sophie Hudson said: “If anyone thinks we’re being unreasonable, tell them to find out how f**king much a new school uniform costs. Then come and talk to me about ‘unreasonable’.”