IT’S been months since anyone came round, and you were already letting things slide before. Here’s five horrendous lockdown habits you’ve picked up:

Picking your nose and wiping it on the bedpost

Once, people had notches on the bedpost. Now they have bogies. But hey, what does it matter when the bed’s a vast loveless expanse with nobody sleeping on the other side for months? At least your snot collection adds colour. Dig away!

Your mouth actually makes a whole host of weird noises, shapes, and sounds but you’ve forgotten about them because you’ve been alone too long and mainly chewing, mouth fully open, like a cow. Food tastes better when you can feel the breeze on your tonsils.

Picking hair out of the drain with your bare hands

It’s just easier than putting on gloves! This one does make sense, and it’s seriously satisfying watching a big clump emerge from the plughole. And then holding it in your hands, like a dead rat, and perhaps petting it for a moment.

Eating food directly from the floor

When you’re sharing space, the five-second rule applies. Now that you’re alone you can eat whatever you like directly from the surface you walk on and nobody can judge you. That dirt from the floor probably boosts your immune system, or something like that.

Drinking from the bottle

Why dirty a glass? It’ll only sit there reproachfully in the morning. Swig wine directly from the bottle and stop acting like a princess. What, you think you’re special or something? 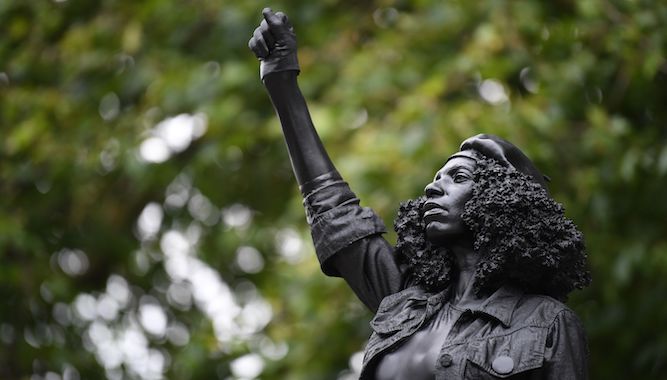 A BLACK Lives Matter statue has appeared in Bristol where Edward Colston used to stand, and you’re pissed off. Here’s how to pretend it’s nothing to do with being racist:

You’ve got to respect planning laws, haven’t you? Apart from when you turned your garage into a pub and got fined. But frothing over a proper risk assessment is much less racist than your instinctive loathing of a black woman’s statue replacing a white man’s.

Edward Colston did a lot for Bristol

‘Colston was a philanthropist who built Bristol, what has that woman ever done?’, cry thousands of men who refer to Clarkson like he’s an old mate. Well, Jen Reid definitely never enslaved tens of thousands of people, so on balance she still comes out ahead.

Anyone moaning about mob rule is under the impression that the streets are awash with violent gangs demanding they stop watching ‘Allo! ‘Allo! The threatened tsunami of statue topplings never materialised. Colston will be on show in a museum soon. Get over it.

Whether you’ve accidentally grasped the wrong end of the stick or are being wilfully ignorant, you can pretend to be free of prejudice by saying the statue shouldn’t be there because ‘All lives matter’. It doesn’t matter that it make no sense even to you.

It will start a race war

There wouldn’t be racism if people stopped bringing it up, claim all those who also firmly believe we’re heading for race war. Luckily this only exists in their minds alongside a vivid fantasy about having a pint with Nigel Farage.