F**king wasps, men in shorts, and other hot weather shit you forget about every year

LOOKING forward to the summer? You really shouldn’t be. Here are a few reasons why hot days are actually the worst.

1. Barbecues. The insects, the lack of cutlery, the bloke chatting to you with coleslaw in his beard. Just no.

2. Summer clothes are so much effort. You’d happily keep your hairy legs undercover but it’s too hot. Time to dig out the razor and fake tan, and trim that toe hair.

3. Sun cream. It’s bad enough putting it on yourself but having to put it on the kids is a sticky, messy hell. Especially if there is sand involved.

4. Wasps. The mean little f**kers are the curse of beer gardens everywhere.

5. Sweating. Even stepping out of the door makes you perspire copiously. You’d rather stay indoors and sit next to a fan until September.

6. Air conditioning. It’s 30 degrees outside yet rather than just opening the windows and finding a pleasant middle ground some tosser insists that the office is always freezing.

7. The pressure to do stuff. You  just want to watch Netflix in your pyjamas but that big stupid sun is glaring at you through the window, daring you to waste this lovely day.

8. Hangovers are worse. You already feel like shit, but it’s so much more debilitating when you have a headache and nausea and the heat of the sun is dehydrating your body and brain even further.

9. No bastard replies to your emails. They’re either on holiday or skiving off in the garden.

10. Travelling anywhere. There is nothing worse than being stuck in a car on a boiling hot day, especially as the summer means there is so much traffic.

12. Picnics. Slightly worse than barbecues because you are often somewhere with no toilets. So it’s either a bush wee or an epic search to find a public loo which has a stench made far worse by the heat.

13. Sleep. What sleep? Can we all acknowledge that getting a good night’s sleep in summer is pretty much impossible? It’s just too bloody hot.

14. Other people’s bodies. Say what you like about winter, at least you aren’t forced to see the wobbling bellies, jiggling moobs and sagging thighs of your fellow citizens. And they don’t have to see yours. 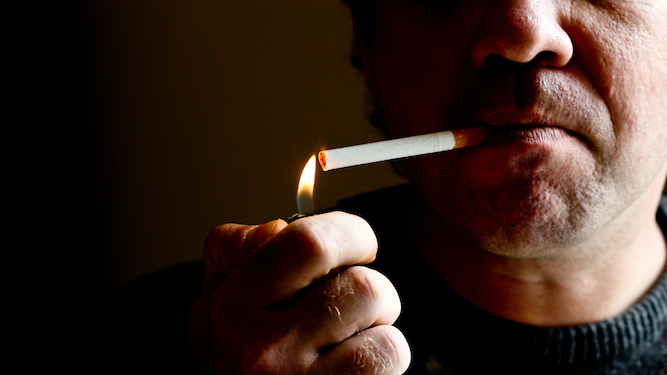 WANT to boost your wellbeing? Do not bother with these simple hacks which are nothing compared to a wank and a smoke.

Nobody likes to drink water because it tastes of f**k all. Even when diluted with squash it’s nothing compared to a lovely pint. Downing several glasses of water a day might be good for your body in the short term, but before long you’ll be busting for a piss and gasping for a fag. Now there’s a habit worth the consequences.

Go for a walk

You exhausted the novelty of going for a walk two weeks into the first lockdown. Now the thought of popping out for a stroll fills you with about as much excitement as the idea of filling out a tax return. Why go outside anyway? You can smoke indoors if you open a window slightly, and wanking in public is a no-go. It has nothing to offer you.

Logging your thoughts in a little book every day is apparently a great way to improve your mood. Anyone who’s tried it will tell you that’s bollocks though. All you’ll really do is compile a diary of how much you fancy a smoke and could really do with a hand shandy. Not exactly a scintillating read for you or future generations.

Get lots of sleep