How to move to the country and not turn Tory

SWAPPING urban life for the slow pace of the country? Worried that the bracing scent of fresh manure will make you right-wing? Here’s how to avoid it:

You used to spend many happy hours with like-minded liberals in your local gastropub. In your new homestead, once pubs are open you can choose between nests of gin-blossomed colonels, self-made tax-hating entrepreneurs and people determined that London should be destroyed, having once visited Woking.

In the countryside people drop round unexpectedly, but being caught perusing the Guardian or watching BBC news without scowling is social death. A hidden bunker will allow you to indulge in proscribed liberal media without the entire county finding out and subjecting you to an ongoing campaign of pointing and tutting.

It sounds like harmless jam-making and nude calendars. In reality it’s a far-right gathering more extreme than the Nazis and the Ku-Klux Klan. Within three visits you’ll be sewing fascist flags, plotting the execution of everyone under 25 and hearing a delightful talk from a sweet old lady who turns out to be Ilsa, she-wolf of the SS.

When schools return be careful. Chats with mums at the school gates will focus on migrants taking all the fruit-picking jobs they would never let their kids do, and lessons will cover maths, English and the benefits of a one-party state. Homeschooling is safer. 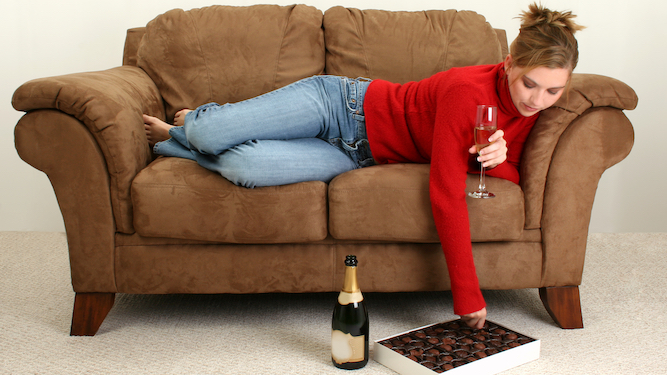 A CHILLED-OUT girlfriend fully aware that Valentine’s Day is a corporate moneymaking scam expects chocolates and a bouquet regardless.

26-year-old Lauren Hewitt, who often rants about the transparently materialistic and sexist marketing-led occasion, would put up with Thorntons but is hinting at Hotel Chocolat.

She said: “February 14th is just another day. I don’t have to celebrate my love when some suits in an office decide it, and you don’t prove respect and commitment with expensive gifts.

“That being said, I’m not going to turn down chocolate. I’m all for standing up for your principles but I’m not bloody Gandhi. And I bet even he’d put fasting aside for a box of Godiva.”

Boyfriend James Bates said: “Last year I fell for all the talk about how it was corporate propaganda forcing us to spend money, bought her nothing and made her a card. That got me solidly bollocked.

“This year I’ve laid out £70 on exactly the kind of fake, empty gifts she affects to despise, because you can’t trust anything women say.

“In fact I’m interested in seeing how her anti-commercial stance holds up when she gets this three-foot-tall teddy bear holding a heart.”