A JOB interviewer was forced to pretend a candidate with a tattoo on his neck was just like any other candidate.

Joseph Turner admitted he had no option but to act as though Nathan Muir, who also had two full ‘sleeves of ink’, was being seriously considered for a client-facing position.

“The whole time he’s siting there, telling me how much of a people person he is, I’m staring at his neck thinking ‘Is it a word? Is it a pattern? What a fucking idiot’.

“I actually had to ask him ‘Why do you want to be a client manager for an accountancy firm?’ Like I meant it. Like he’s suitable for any job that’s not ‘mob enforcer’.

“I thanked him for coming, told him we’d let him know and then watched him walk away, into a blissful world where having black ink etched into your neck doesn’t make you completely unemployable.” 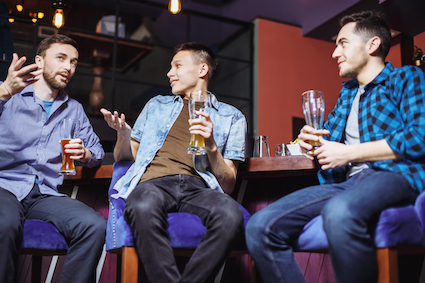 A GROUP of male Guardian readers have been wracked with guilt after realising their evening in the pub was a sexist, men-only event.

Tom Logan and three friends thoughtlessly excluded women and the #MeToo moment from their visit to the White Lion pub yesterday, and feel they may even have harassed female customers with their presence.

Geography teacher Logan said: “We went for a few pints and a burger without even considering the glaring gender imbalance. That’s just typical of an oppressive patriarchy like us.

“Half the world’s population was completely unable to make its voice heard on the guest ales.

“The one woman who was there – the barmaid – we absolutely failed to treat as an equal. Nobody enquired about the pay gap and her emotional labour went painfully uncompensated.

“There haven’t been any press reports about our sickening male arrogance yet, but I’m drafting my full apology now.”

Logan has now cancelled a Friday trip to the Black Bear Inn after failing to get an equal number of women to attend, disappointing friend Eleanor Shaw who was definitely up for a pint.