No lock on the bathroom door, and other f**ked-up shit happening in other people's houses right now

HAVE you ever visited someone’s house and thought ‘What the f**k is happening?’ Here’s a walkthrough of the most alien home imaginable:

No lock on the bathroom door

Picture the nightmare: you visit a friend’s house for the first time, go for a wee and find there’s no way to protect yourself from intruders.  No one explains why – it’s not like it’s just broken – and you piss in a constant state of fear of their partner bumbling in and catching you mid-stream.

Furniture not pointing at a television

You walk next door to find that these freaks have a living room that doesn’t revolve entirely around a TV. Furniture is arranged next to the fireplace. There’s a small table piled with games. The armchair points at the window, for Christ’s sake. You break out into a cold sweat.

Hundreds of pointless cushions on the bed

The bed in the guest room has an excessive number of cushions neatly placed on it. Are you meant to lie on top of them? If you put them all on the floor you’ll make a mess of the otherwise frighteningly neat room. You think you might be tortured like the guy in Misery if you don’t put them back in exactly the right order the next morning so opt to sleep on the floor.

Their kitchen cupboards are filled with weird brands you would never allow in your house. A lot of them seem to be German and look like they’re from a health food shop, but it appears these weirdos are also happy to eat Tesco own brand cornflakes. And what kind of lunatic buys a 1kg tub of Utterly Butterly? You are scared now, and want to go home.

Eggs in the fridge

Worst of all is what they’ve done to the poor eggs. Rather than sit them on the counter like normal people, these sick creeps keep their eggs in the fridge, incubating them like they’ll one day hatch into cold, evil lizards. Make your excuses and escape. You’ll never be able to relax in this monstrous hellhole.

How I'd fight back if the Russians invaded Nantwich, by a man from Nantwich 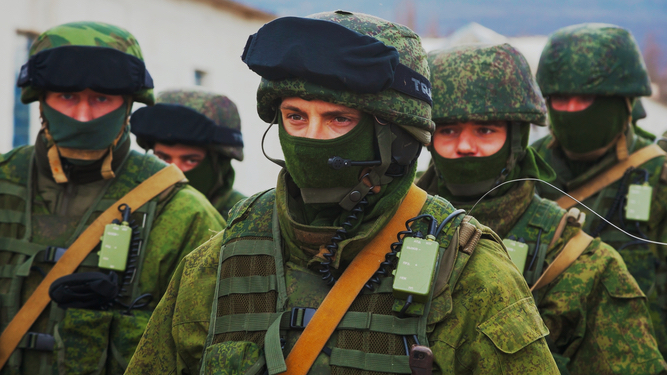 Britain’s namby pamby gun laws mean we’d have to get AK-74s off Russian troops by sneaking up behind them and breaking their necks. Fortunately I’ve done loads of stealth kills in computer games, and it’s no harder than getting the lid off a jam jar.

Ideally your unit would have SAS training, but I couldn’t count on that in Nantwich, so I’d pick anyone with military potential. It would be good if the girls were fit too, like Jennifer Grey in Red Dawn. It’ll be nice to talk to real people for once instead of just going on the forums on Outpost Gallifrey.

I’d distract the Russians – probably Spetsnaz commandos – by opening fire from the roof of Boots. Then my squad would jump up from wheelie bins and take them out with AKs and petrol bombs. I should really be military top brass with this brilliant tactical thinking.

Use your local terrain

Use your local knowledge to identify locations for weapons caches and sniper attacks. I know the Nantwich area like the back of my hand because I still live with my mum and dad. Which isn’t that unusual when you’re 28, actually.

Save Clare in Tesco

I’d rescue Clare, the pretty one at Tesco, from lecherous Russian troops and she’d be so grateful she’d go out with me. (It’d be easier to ask her to go for a coffee rather than wait for Putin to invade, but talking to girls brings on my terrible sweat problem.)

Train yourself to resist torture

Any soldier must accept the risk of capture and torture. I’ve been increasing my pain threshold by wearing a rubber band on my wrist and pinging it really hard every 20 minutes. It really stings, so soon it’ll be impossible to make me talk.

Gradually liberate all of Britain

My band of freedom fighters would inspire others. Faced with an unwinnable guerrilla war, the Russians would go home. Putin would be sacked, I’d be a hero and loads of girls would fancy me. So basically if Russia invades it’d be great and I wouldn’t be a virgin anymore.