Six phrases that instantly single you out as an absolute bellend

MET someone who believes ‘gin o’clock!’ is the last word in wit? What a great timesaver to discovering they’re a tedious cock. Watch out for these:

If a child said ‘holibobs’ it might almost pass as cute, but children don’t say it. They’ve got more dignity. This monstrosity is the preserve of people who view themselves as a cross between Jamie Oliver and the Famous Five rather than just irritating f**kwits.

Everyone gets it: Brexit is awful, has been awful, and will always be awful. Please don’t make it worse by using this bum-clenchingly infuriating portmanteau on top of everything else.

Everyone knows what day it is. You’re not uniqely blessed with the ability to count the days in a working week, or to understand that once Wednesday is over there are fewer days left to work than have already been worked. You’re not special.

Used by those who think they are non-conforming original thinkers and believe in conspiracy theories, aliens and that the Queen is a lizard person plotting a global world order with Beyoncé and Henry Kissinger. 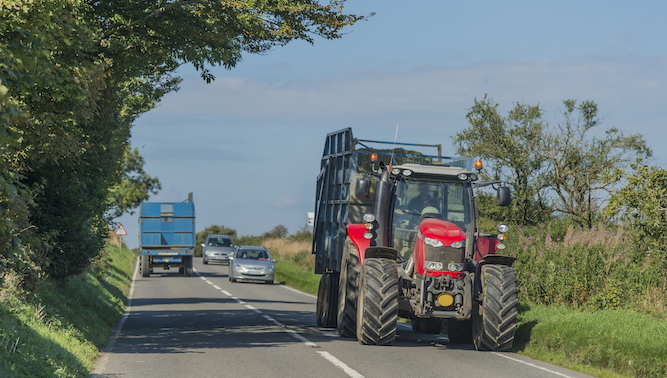 A TRACTOR driver holding up a long queue of traffic on an A-road has admitted he is absolutely f**king loving it.

Joe Turner pulled his Massey Ferguson 8700S out onto the A53 in Staffordshire, a popular route for avoiding the motorway, just in front of an Audi driver hoping to make quick time to Chester and has been chugging along at 25mph ever since.

He said: “This is the life. An open road too winding to overtake on, a massive tractor that stinks of cowshit, and 28 cars stuck firmly behind me boiling with frustration.

“Eat my hay, motherf**ckers. This cost more than your car and it could flatten it. Look at the size of my tyres and weep.

“What? I’m just trying to do important rural work that puts food on your table, yet I get beeped at, shouted at and given the w**ker sign. Keep it coming. I’m lapping it up.

“I was only meant to be going to the next field, 250 yards away. I’m 14 miles away from where I need to be. The drive back is going to be so damn sweet.”

He added: “I’ve got to do a load of stuff with cow’s arses after this. Don’t begrudge me my simple joys.”