A WOMAN believes she has the God-given right to see any new kitchen that has been installed even if she barely knows the householders in question.

Carolyn Ryan, from Nottingham, has demanded access to the newly-fitted kitchens of neighbours, relatives of friends and is currently negotiating a visit to the home of a workmate she had previously spoken to twice.

She said: “Well I’m thinking about a new kitchen – we’ve had this one 18 months – so I need to look for ideas.

“It’s not like they mind. Why would they mind? What’s the point in having a new kitchen fitted if you don’t let people see it?

“Angie at my old work, who was eating her dinner when I popped in, she’s had walnut units and an induction hob. Whereas Cath, from school – but we’re Facebook friends –  has gloss white units and an island she hasn’t really got the room for.

“My cousin Kerry in Southampton’s having one fitted now with one of those boiling water taps. I haven’t seen her since we were 13 but it’s time we made the effort.”

Nathan Muir, from nearby Plumtree, said: “Er, darling, there’s a woman in our kitchen. Apparently you were chatting in the queue at Tesco and she followed you home.”

We’ve reached the 'hardly having sex' stage of our relationship and we're both incredibly relieved! 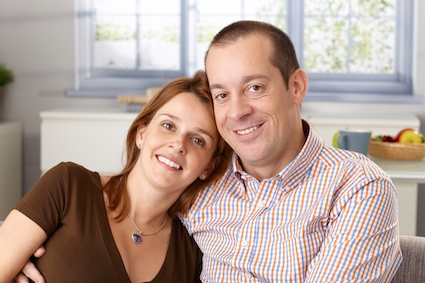 HAVING sex is just an undignified way to knacker yourself out after you’ve been together a while. We’d rather watch telly and have a laugh.

Advice columns are always stuffed with letters from couples desperate for ways to spice up their ailing sex life, but why bother? If you don’t feel like having sex, attempting to introduce some ‘light bondage’ at this late stage is only going to make things even more awkward.

Before we slipped into our current blissfully copulation-free state we tried acting out a kinky teacher/pupil role-play scenario and that hideously embarrassing experience pushed us closer to divorce than not having sex ever could.

And is sex even that great? Rubbing genitals just seems like something that should be left to dogs, especially when, as humans, we have invented much better ways of enjoying ourselves, like going on rollercoasters or taking MDMA.

If you want to get all anxious about the fact that you aren’t having nine hour tantric sexathons, or are secretly freaked out that your partner has read Fifty Shades of Grey so many times that the pages are falling out, I feel sorry for you.

We’ll be watching The Walking Dead with a plate of Jammie Dodgers. And it will be incredibly satisfying for both of us.