A long-haul flight, and other awful places to be dumped

WORRIED your relationship is on the rocks? Here are some awful locations to get dumped in that will really rub salt into the wound.

The average Welcome Break isn’t a particularly cheery place at the best of times, let alone when you’ve been told that your soulmate wants to ‘see other people’. You can’t even have a drink to console yourself, so it’s either eating your own body weight in sweets from WHSmith or losing all your money in the incongruous slot machine area.

On a long-haul flight

If your sweetheart is willing to sit next to you in awkward, occasionally teary silence for nine hours rather than spend another second as your partner, you’ve seriously f**ked it. Hopefully the flight is the return leg of the journey, otherwise you’ll have to spend a week at an all-inclusive resort trying to avoid meeting each other in the queue for lunch.

It’s late, you’re drunk and you’ve spent all night bickering with your partner, which sets up a strip-lit kebab shop full of people messily stuffing doners into their gobs as the perfect arena for a dramatic break-up. Expect the other punters to take sides, offer unhelpful advice, or just ignore your pathetic little scene and throw fries at each other.

The place you first met

If your partner takes you out to the place you had your first date, the last thing you’ll expect is that they’re going to destroy that happy memory by dumping you. But if they’re so emotionally tone-deaf they can’t see a problem with this, you’ve just had a lucky escape from a lifetime of tactless thoughtlessness.

At your wedding reception

Everyone’s worst nightmare is walking down the aisle to find there’s no one there at the end, but even worse would be being chucked just as you cut the cake. You’d be forever known as the poor sod who got ditched at their own wedding, and you wouldn’t even be able to get the money back from the caterers.

Under Pressure, and other classic karaoke songs you will absolutely butcher 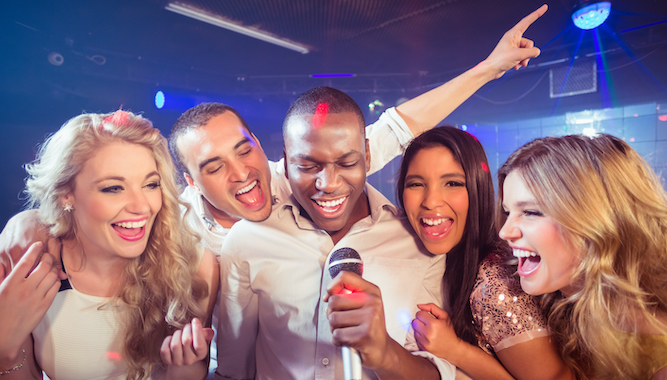 THINK you’re an amazing singer who smashes it at karaoke? Prepare to realise how shit you actually are when you attempt these classics.

There’s only so far exaggerated fist pumps can get you before your profound lack of singing ability is laid bare. Your gesticulations will get ever more frantic throughout this rock tour de force as you witness the faces of your fellow patrons turn from sympathetic encouragement to horrified embarrassment.

This ballad requires the kind of pipes reserved for frighteningly talented singers like Beyoncé, as it is essentially very loud shouting in tune. To perform it requires lung power that, after two bottles of red wine and an entire packet of Embassy, you simply don’t possess. Expect to black out at some point during the third or fourth chorus.

Do you have the vocal range of Freddie Mercury, a famously gifted singer and entertainer? No, but have you had eight shots of Sambuca and lost all inhibitions and common sense? Unfortunately for you and those within earshot, yes. Yes you have.

One of the most romantic songs of all time, and it is being hatcheted apart by you and Neil from accounts awkwardly attempting to duet during your annual office night out. Colleagues will later tell you your performance sounded like two bedraggled alley cats fighting over an old kebab. But you won’t tell them about the snog you and Neil shared by the bins behind the pub afterwards.

Are you ready for all the lads in your karaoke bar to go absolutely ballistic and shower everyone with low-quality, warm lager? Almost certainly not, but as soon as this song comes on, expect them to be standing on the chairs and confusing ‘singing along’ with ‘yelling the lyrics as loud as possible’.